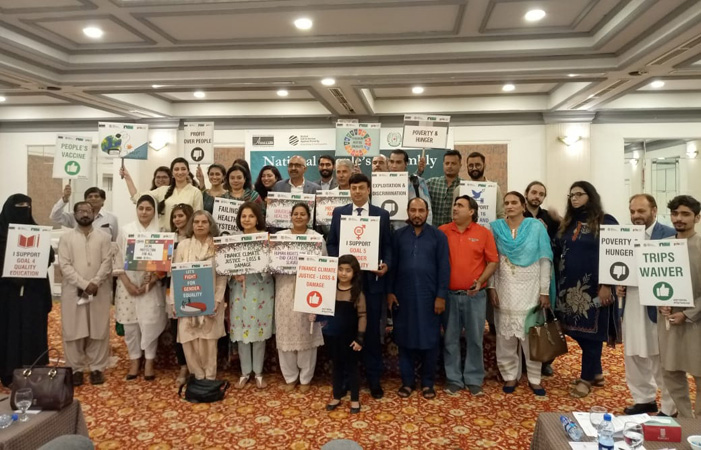 In the wake of recent super floods and climate change, experts from different fields stressed on Global emission targets and reparations to be reconsidered by the rich countries who are responsible for the accelerated and relentless nature of climate catastrophes hitting countries such as Pakistan.

These thoughts were expressed by experts from civil society, media and politicians during a National People’s Assembly on contemporary challenges faced by Pakistan, held today. The session was jointly organized by Awaz CDS, Global Call to Action Against Poverty, The People’s Vaccine, UGOOD, Pakistan Development Alliance with the purpose of developing a charter of demands to be presented to the government for immediate actions.

Mohammad Zia ur Rehman, CEO Awaz CDS and National Convener Pakistan Development Alliance highlighted the contemporary challenges that Pakistan face such as political instability, human rights and democracy, economic governance and delivery as well as poverty and high inflation rates that are making people’s lives miserable. He further said that UNGA session is going on and people’s assemblies are being organized globally and Pakistan is among these counties. The National People’s Assembly was held with aim to develop a charter of demands to present it to the government of Pakistan and urge it to take immediate actions to tackle challenges especially in the wake of recent super floods.

Basheer Shah, representative Awami Workers Party said that neoliberalism is the root cause of abysmal economic conditions and inequalities between rich and poor. Capitalist economies do not care about the rights of people, governance or democracy. Capital is there sole interest and wealth concentrates in the hands of few.

Zafrullah khan, Convener Parliamentary Research Group spoke about Human rights and situation of democracy in Pakistan. He highlighted systematic and structural issues Pakistan faced and recommended viable solutions which according to him will take long time to improve. He appreciated conducting People’s Assembly to address the issues at this critical time but expressed disappointment that the national assembly has not met since April this year.

While addressing the impacts of climate change on agriculture in Pakistan and crop losses due to floods, droughts and heatwaves, CEO Resilient Future International, Aftab Alam spoke about food security especially in the wake of recent super floods.

Regional Director Oxfam international, Mustaf Talpur appreciated the role of organizers in conducting this much needed assembly during these times. He talked about the inequalities in Pakistan, their root causes and solutions.