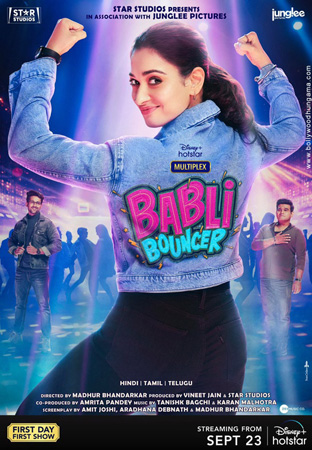 Babli Bouncer is not like any of Madhur Bhandarkar’s previous films. Perhaps it is a sign of times that the filmmaker–who has time and again made stories on women breaking the glass ceiling–uses the comedy genre for the trope this time. But sadly, unlike many of his previous attempts, Babli Bouncer lacks a soul. The film can’t decide if it wants to be a coming-of-age story or a fun comedy laden with a hundred stereotypes. It tries to be both and ends up being neither, wasting a promising plot and doing disservice something important.

Babli Bouncer is about the titular Babli Tanwar, a girl from the Asola-Fatehpur Beri twin villages near Delhi, which are known as the village of bouncers. The pehelwans of these villages work as bouncers in the nightclubs of Delhi-NCR. And Babli follows suit as a ‘lady bouncer’. Her motivation is to escape marriage and meet a cute Delhi boy she saw at a village function. The film then shows Babli’s growth as she re-evaluates her life choices and learns to prioritise what matters.

First of all, Babli Bouncer is not about female bouncers or the challenges they face. It is not about a woman breaking the glass ceiling in this male-dominated field. Babli’s journey in the field is actually quite easy, a bit too easy if you ask me. But the film focusses on her growth as a person. The bouncer gig is just a backdrop. It could very well have been anything. The story here is more about how a girl from a village learns her own worth and realises there is more to life than just dreaming about the perfect husband.

Tamannaah is earnest and surprisingly looks the part as Babli. She has the unenviable task of carrying the film on her shoulders and does it well. Without her charm, the film would have been unwatchable in parts. But she does well, capturing the physicality of the rustic Babli well. She does falter with the emotional bits but thankfully, has the support of some wonderful actors who fill the gaps. Saurabh Shukla as Babli’s father is sublime as well. Sahil Vaid as her smitten betrothed Kukku, a bouncer himself, is charming and pretty much the story’s moral compass. The other actors do their part well, particularly Abhishek Bajaj, who plays Babli’s love interest Viraj.

However, despite so much going for it, Babli Bouncer squanders it all with some rather questionable narrative choices. The setup, the first half hour, is cringeworthy to say the least, dropping jokes out of nowhere like it’s nobody’s business. Sadly, the jokes don’t land, the comic relief is annoying, and everything feels forced. A montage of the innovative ways in which Babli annoys her suitors has been done in much better fashion years ago by films like Namastey London. There is nothing fresh there.

The dialogue seems like it is out of a 90s film, written by someone with only a vague idea of how people from the region talk. The stereotypes are overflowing, with every character reduced to a caricature of how a south Bombay person would see them probably. The cop is caricaturishly comic, the Delhi dude is all about ‘my baahubali saansad daddy’, the girls are snorting in the club, and the villagers are all simpletons. I understand that the narrative needed a dramatic presentation of the Delhi Babli sees. But even after accounting for that, the presentation lacks subtlety.

The film gets better in the second half after Babli’s epiphany and as she transforms into someone who is more focused on ‘apne pairon pe khada hona’. The transformation is much needed but comes quite late, if you ask me. And even then, the challenges Babli faces or the way she handles situations requires more common sense than heroic. And the inclusion of random jokes in some tense situations, almost always delivered in the Haryanavi twang, should be sent back to 2002 where it belongs.