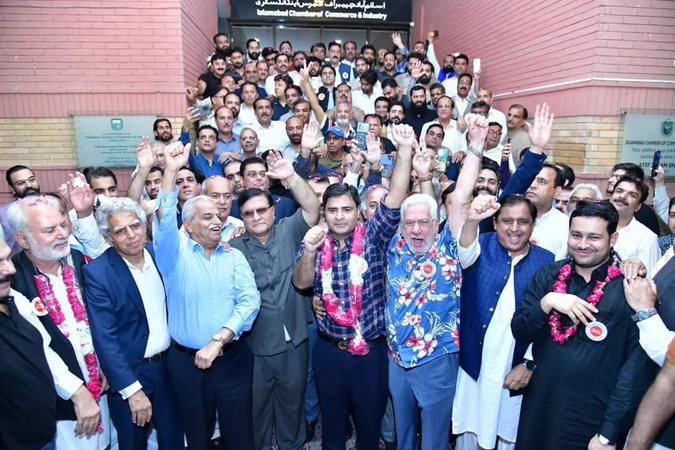 The nominated presidential candidate of Founders Group, Ahsan Zafar Bakhtawari has Secured record 987 and achieved historical victory in the annual election 2022-23, of the Islamabad Chamber of Commerce and Industries (ICCI).

In the annual election 2022-23 of the Islamabad Chamber of Commerce and Industries, the Founders Group won all the seats of the executive committee with a huge majority. Founders Group’s Presidential nominated candidate Ahsan Zafar Bakhtawari set a record by taking more 987 votes, the turnout in the election was also a record of more than 80%, in the history of the chamber, no candidate has ever received so many votes, so many turnouts has never been seen Speaking on the occasion, Upcoming president of ICCI Ahsan Zafar Bakhtawari said that he will play his full role in bringing Islamabad Chamber of Commerce and Industry to the international level and connecting the business community with international markets. He said that he will play an active role with his team in improving the image of Islamabad Chamber of Commerce and Industry not only in Pakistan but also internationally.

He said that there is a need to pave the way for international investment in the country at this time, by working on it, his team will create opportunities for trade and investment in the global market by connecting local businessmen with the international market. Ahsan Bakhtavari said that connecting local businessmen with regional and global markets and increasing trade is part of their core vision. He said that they are aware of the problems faced by the business community in Islamabad at present and fully prepared to face these challenges.” He said that the business community should hope that he raises their voices at every forum to solve these problems.

After the announcement of the results, the supporters of the Founders Group had a great celebration, raised slogans, distributed sweets, lifted the nominated presidential candidate Ahsan Zafar Bakhtawari on their shoulders and carried him in a “baghi” to his election office Blue Area in the form of a rally. According to the details, polling continued uninterruptedly from 9 am to 5 pm in Chamber House G-8/1 Islamabad yesterday in connection with the Annual Election 2022-23 of Islamabad Chamber of Commerce and Industries.

According to the results announced by Chairman Election Zahid Maqbool and committee members Sheikh Abdul Waheed and Karim Aziz Malik, the Founders Group swept the elections in the AM class (Associate Class) of the Executive Committee and all the CM Class (Corporate Class) of the Executive Committee. 7 seats have been won by a huge margin, according to the results, among the candidates of the founders group of AM class (associate class) of the executive committee, the nominated presidential candidate Ahsan Zafar Bakhtawari got 987, Ahmed Khan 942, Chaudhry Muhammad Maqsood Tabish 929, Ashfaq Hussain Chattha 908, Faizan Shahzad 893, M Irfan Zafar 880 and M Rizwan Chheena won by getting 847 votes.

According to the results, Amir Hamza got 396, Fahad Waheed 393 among the winning candidates of Founders Group in the CM Class (Corporate Class) of the Executive Committee. Chaudhry Muhammad Naeem got 392 votes, Muhammad Usman 383, Muhammad Yahya 382, Malik Jalil Ahmed Awan 369 and Nasir M. Qureshi got 361 votes.