Are Imran Abbas and Ameesha dating? 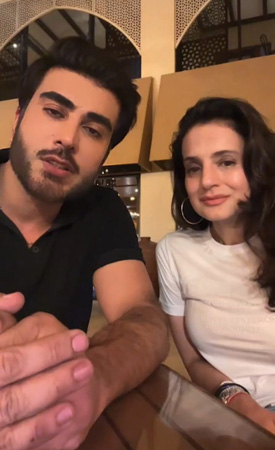 The ‘Amanat’ actor recently met the Bollywood beauty, Ameesha, at an awards ceremony in Bahrain, and post their appearance at the ‘Social Media Awards’, both the actors are spending some quality time together, as they revived their friendship in the city.

Earlier, Imran Abbas shared a snippet of their first meeting from the stage, where the star serenaded the crowd at the awards ceremony with a few lines from the Bollywood track ‘Jaaneman Jaanemann’ from ‘Kaho Naa Pyar Hai’ – the debut movie of Ameesha Patel. “Glad to represent Pakistan at yet another international platform and connect back with my old friend @ameeshapatel9 after many years,” he wrote in the caption of the clip that created quite a buzz on the photo and video sharing application and was viral across the internet.

Patel responded to the post with a comment, “Was fabulous catching up with u my dear friend and superstar Imran. Always lovely to see u.”

Later, Abbas treated the fans with yet another glimpse of the two in his live session on Instagram. Now, very recently, Abbas shared a new video which sees the actors dancing to one of the old Bollywood tunes picturized upon Patel. “Loved being “very filmy” with my friend @ameeshapatel9 on one of my favourite typical Bollywood tunes originally shot on her , sung by @therealalkayagnik and Udit Narayan,” he noted in the caption. On the work front, Imran Abbas last received applause for his acting in ‘Amanat’ opposite Urwa Hocane and Saboor Aly. Apart from a number of stellar drama performances throughout his career span, the prolific actor has also worked in a couple of Bollywood films including ‘Creature’ and ‘Ae Dil Hai Mushkil’. On the other hand, Ameesha Patel is best known for her work in films like ‘Kaho Na Pyar Hai’, ‘Gadar’, ‘Bhool Bhulaiyaa’ and ‘Race’ franchise.