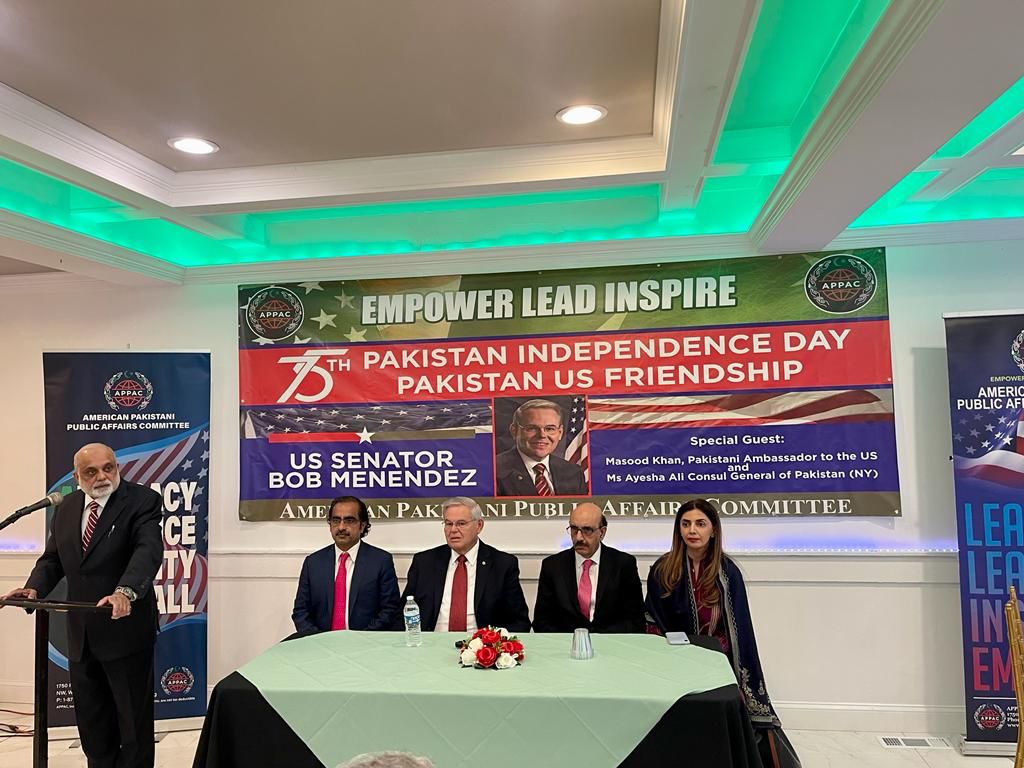 During an event organized by Pakistani-American community in New Jersey Chairman Senate Foreign relations committee, Senator Bob Menendez said, “We have to get a disaster relief package for Pakistan from the US Congress and organize a national donors conference for the flood victims in Pakistan.”

Senator called for provision of Temporary Protected Status (TPS) for Pakistanis living in the United States and unable to return home safely. Says that “I will make this case for Pakistan in front of President Biden”.

Menendez said that he will urge the US Administration to financially assist Pakistan from the International Reduction Act which will drive the Global Climate Action.

Ambassador Masood Khan thanked Senator Menendez, the US Congress and the US government for expressing solidarity with Pakistan and for providing timely assistance for the initial stage of flood response in Pakistan.

Ambassador Khan also thanked Senator Menendez for personally monitoring the flood situation in Pakistan, reaching out to the administration for providing urgent humanitarian assistance for rescue and relief operations and for making a long term commitment for rehabilitation and reconstruction.

He also thanked the United States for acknowledging the connection between extreme weather patterns because of climate change and the unprecedented floods in Pakistan.

The event was very well organized under the leadership of Dr. Ijaz, prominent community leader, in which several community members who have been mobilizing support of Pakistan flood relief participated. Mr. Faizan Haq, a renowned academic made a powerful presentation depicting the devastation caused by floods in Pakistan. Dr. Mehmood Alam conducted the proceedings and Mr. Asad Chaudhary made arrangements for the projection of the challenges created by Pakistani floods.

Ambassador Masood Khan said, “There has to be an international strategy to save the world from the scourge of a number of repeated and deadly climate driven disasters and in this context the United States has to play the role of leadership”.

“The real challenge lies ahead as we enter into the phase of bringing life back to the flood affected areas, rebuilding roads, repairing and restoring infrastructure, generate , cultivate crop land and construct houses, schools and hospitals”, said Masood Khan adding that this was a Herculean task for which Pakistan would need continued support of the United States on multi-year basis.

Ms. Ayesha Ali, Consul General of Pakistan in New York appreciated the role of Pakistani-American community in raising donations for the flood affected people in Pakistan. She said “Our diaspora community has always stood up in times of need and have always given back to Pakistan”.

“The biggest challenge would be in the recovery and relief phase and we should continue to support the flood victims in Pakistan”, said Consul General Ayesha Ali

Dr. Ijaz Ahmed, President APPAC, thanked Senator Menendez and Ambassador Masood Khan for attending the event. He expressed solidarity with the flood victims in Pakistan and said that APPAC will make all efforts to provide humanitarian assistance to people who have been badly affected by the devastating floods.

The event was attended by representatives from different humanitarian organizations and vibrant members of Pakistani-American community.

Two humanitarian organizations announced that they had raised $6 million and $5 million respectively for flood relief in Pakistan.