A week as king — how has Charles III fared? 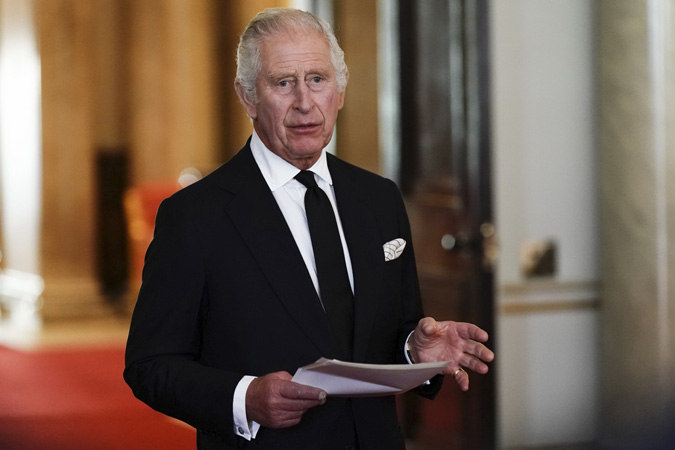 King Charles III has in the last week faced the difficult task of handling his own grief at the death of his mother, giving voice to the nation’s loss and taking on the job of royal figurehead.

With Britain swept up in a wave of pro-monarchy sentiment since Queen Elizabeth II died on September 8, the 73-year-old Charles has won almost universal praise in the media.

But his first week in power has not been entirely blemish-free.

RISING TO THE OCCASION — Charles endured the longest wait for the throne in British history and has the toughest act to follow, so all eyes were on him on when he made his first address to the nation the day after the queen’s demise. Seated at a wooden table in a black suit and tie on Friday last week, he mixed personal tributes to his mother — “darling mama” – with pledges about how he would reign as a ceremonial constitutional monarch. “As the queen herself did with such unswerving devotion, I too now solemnly pledge myself, throughout the remaining time God grants me, to uphold the constitutional principles at the heart of our nation,” he said. He also promised to step back from his charitable activities and trusts that have led to him being accused of meddling in national politics in the past – a major problem for a sovereign who is meant to be neutral. Addressing another more personal issue that risked causing tensions during the national mourning period, he declared his “love” for his estranged youngest son Harry and daughter-in-law Meghan. The right-wing Daily Mail newspaper called it “an exquisite and deeply personal tribute” while former BBC royal correspondent Peter Hunt said it was “pitch perfect” in one of several positive reviews on social media.

MASTER OF CEREMONIES — Charles’ next role was overseeing the transfer of the queen’s body to Edinburgh from her Balmoral estate, being sworn in, then presiding over a ceremony that saw his mother’s casket brought to St. Giles’ cathedral in the Scottish capital on Monday. Racking up the airmiles – despite his life-long commitment to environmental causes – he flew between London and Scotland, then over to Northern Ireland’s capital Belfast on Tuesday for a meeting with the province’s feuding political leaders. That trip, and another to Wales on Friday, are designed to demonstrate his commitment to the increasingly strained ties of the United Kingdom amid fears that two of its four nations – Scotland and Northern Ireland – might one day break away. “I take up my new duties resolved to seek the welfare of all the inhabitants of Northern Ireland,” he said in a speech at Hillsborough Castle. Throughout the week, the prominent role of his second wife, Camilla, now known as the Queen Consort, barely drew attention – a far cry from the 1990s and early 2000s when Charles’ relationship with her during and after his marriage to Princess Diana was a damaging scandal.

RATINGS BOOST — a new survey measuring British attitudes to Charles suggested an outpouring of sympathy – and generally positive reviews. At the start of the week, three quarters of Britons told pollsters YouGov that Charles had provided good leadership, with just 5.0 percent saying he had done a bad job. Looking ahead to his reign, 63 percent said they thought Charles would do a good job, with only 15 percent thinking the opposite. That marked a sharp rise since a survey in May when only a third of respondents said he would make a good king, while almost exactly the same proportion said he would not. “He has made a very strong start and I think in particular he showed the monarchy will be more open,” said Vernon Bogdanor, a British political scientist and historian. “So long as King Charles does not put a foot wrong, I would expect the monarchy to enjoy the same level of support as it did under Queen Elizabeth, possibly more so,” Robert Hazell, a constitutional expert from University College London, told AFP.

MISSTEPS — recent scandals surrounding the Windsors from Prince Andrew’s links to billionaire US paedophile Jeffrey Epstein and accusations of racism from Prince Harry’s mixed-race wife Meghan have been temporarily put out of mind. But Charles has been caught on camera twice displaying the sort of imperious, entitled behaviour that might in other circumstances have undermined his push for a more modern monarchy. On Saturday as his accession was formally rubber-stamped, he gestured haughtily for aides to clear a table where he was signing documents. Then on Tuesday he was overheard complaining about his pen leaking ink onto his fingers. “Oh God, I hate this!” Charles complained, before standing up abruptly and handing the misfunctioning quill to his wife. “I can’t bear this bloody thing… every stinking time,” he continued, unaware of the camera in the room. Another own-goal was immediately announcing plans to lay off up to 100 staff at his former official residence, Clarence House, which was denounced as “callous” by a trade union.