From the backyard of the universe 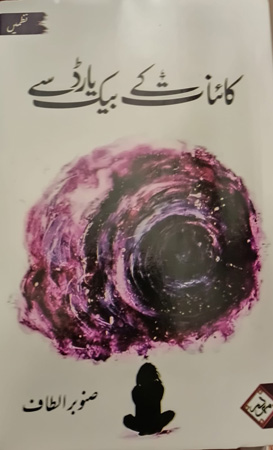 This feeling influenced her poems and short stories as regularly published in Islamabad’s literary journals. Her interest in criticism of prose on literature and social issues were also published. She continued with her research work and obtained PhD on criticism of Novels from National University of Languages Islamabad. She is presently a part of faculty in Urdu. So her fields of interests are poems fiction and criticism. Her collection of poems appear in a book form titled ‘Kainaat Kei Backyard Sei’ (from the backyard of Universe) published by Meherdar Quetta. There are three major interests of Dr. Sanober Altaf; poetry prose and fiction. Naseer Ahmad Nasir a poet of international repute solves the problem of what area should Dr. Sanober adopt and declares that saying Nazms should be her first choice. He gave this analysis in the inaugural ceremony of Sanober Altaf’s book Kainaat Kei Backyard Sei (from the backyard of the Universe) in Halqa-e-Arbab-Zauq in Islamabad.

Fear and shadow cigarette light wall and room appear as frequent metaphors in Sanober’s poems. In her poem ‘A room of one’s own’ she says ‘Mere Paas Aik Kamra Hei Aur Tum Ho/ Yei Woh Kamra Hei Jis Nei Mujhe Tumhare Ba’ad Panah Di Hei’ (I have a room and you are there/It is that room that gave me shelter after you left) – Page 24. So a room is that metaphor which is an important ingredient of Sanober’s poems. It is also a center point of her life. The room also speaks to her. She says ‘Yean Dubak Kar/Tumhain Socha Jaa Sakta Hei/Dil Chahe Tau Tumhain Bithaya Jaa Sakta Hei/ Nazmain Kahi Jaa Sakti Hain/Aur Saare Kainaati Masaail Hul Kiya Jaa Sakte Hain’ (you can even write short stories. You can find refuge in this room where you can think about your beloved. You may seat him in front of you. You can even construct your poems. You can solve universal problems). Sanober equates her room to an old servant who looks after you in your loneliness.

Sanober’s atmosphere in her house was very congenial to give respect to words. Writing prose therefore made her initiate her writing in prose to justify the beginning and end to her stories. In writing poetry, especially Nasari Nazms made her write them without worrying for a proper ending. Plus the poet’s disposition always remained as a part of poem. One can separate one’s personality from the contents but ultimately one has to look into the mirror. This important fact made her drift from fiction to poetry. Among the modern day poets she became a valuable addition – a poet that uses modern expressions and vocabulary to write poems.

A woman’s anguish is portrayed in her poem ‘Bejanam Ta’abeeron Ka Iskaat’ – Page 30 in which a woman’s house has been shown as her tomb where all the days are spent without sunlight reaching the tomb. They remain working like ants busy in useless hard work till termite licks them. The poem ends ‘Woh Shaam Hote Hi Jawan Hone Lagti Hain/Aur Suraj Unki Kokh Main Gharoob Ho Jata Hei’ (They get ready to be young as the sun sets in their uterus’ they get ready or the nights long hauls to give pleasure to their better halves (Gods). The next poem ”Tanhai Ka Ma’abad’ (demi-God of loneliness) gives you a choice to adapt yourself as a tenant or as owner. A tenant can run away whenever needed but an owner has to sustain all the miseries; the seepage in the walls. Also tip-tip of loose water taps along with June’s heat and cold of January etc. as your fate. If you do not learn to live with these daily happenings then roof shall fall and you shall be buried in the debris.

About her poems Sanober’s achievement is that she has proved her existence in a small area in a moon that is part of great galaxy of stars. Then she confronted the age-old question of a woman and love. She discovered that a woman as an entity is very brave and intelligent. She is also strong and deep. The reason being that whatever portion of the sky is within her visibility she makes a world of her own that enters her household and her own self. She therefore has two eyes to observe and feel whereas a man only looks and that too superficially to the outside world. A woman on the other hand a man looks at the world with his socio-political vision with one eye.

It is time now or presenting Sanober’s first poem. It is titled ‘Frame Kei Gughrafie Main Portrait Kei Qatl Ka Mansooba’ (a plan to murder a portrait in the geography of the frame) – Page 14. It is representation of her point of view of woman and love. She says both are present in the room. She makes birds with hands in the candle light. He makes them disappear with his hands. Both enjoy this game. Then there is a shadow in the room behind the candle to attack her since 32 years. She lights a cigarette and the shadow melts away. Both smoke together and write a poem titled ‘Yei Sab Bus Ik Sapna Hei’ (it is just a dream). Then the shadow attacks from behind the candle and tears both of them apart. The candle is off. The clock starts getting melted. Calendar is on ventilator. Doves are dying and her diary is lost.

With this book we have discovered a poet of new diction vocabulary and treatment thanks to Dr. Rawish Nadeem and Naseer Ahmad Nasir.