* Hundreds of patients admitted to medical facilities in Punjab, Sindh, KP and Balochistan
* 2,181 cases of virus reported so far in Punjab alone
* Shortage of anti-fever medicines adds to people's miseries 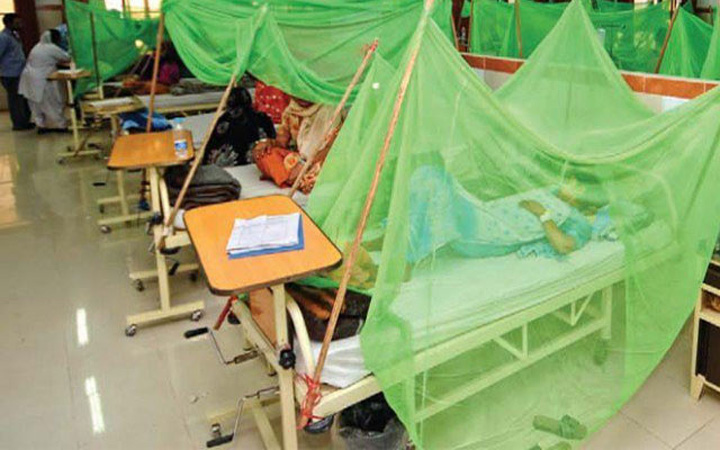 Panic and fear is spreading among people as country continues to report more and more dengue virus cases on a daily basis. Dengue has started to take a dangerous turn in Punjab, Sindh, Khyber Pakhtunkhwa and Balochistan amid severe shortage of ant-fever medicines, a private TV channel reported. As many as 169 patients were admitted to three hospitals in Rawalpindi on Sunday, out of which 99 tested positive while the remaining results were being processed.

District Coordinator of Epidemics Prevention and Control (DCEPC), Dr Sajjad Mehmood, informed that 58 patients were admitted to Benazir Bhutto Hospital, 57 to District Headquarters Hospital and 54 to the Holy Family Hospital. He said that out of the total admitted patients, 127 belonged to Rawalpindi, 36 from Islamabad, two from Attock and one each from Abbottabad, Nowshera, Peshawar and Poonch, AJK.

According to health department sources, a total of 2181 cases of dengue virus have been reported so far during the current year while four people died of the virus and 470 patients are under treatment in different hospitals of the province. The Punjab Primary and Secondary Healthcare Department reported 61 cases of dengue in Rawalpindi, 56 in Lahore, 08 in Gujranwala, 03 in Multan, 02 in Okara,

02 in Muzaffargarh, 01 in Vehari, 02 in Faisalabad, 05 in Nankana Sahib, 01 in Hafizabad, 01 in Rahimyar Khan, 01 in Mianwali, 01 in Chiniot, 01 in Bhakkar, 01 in Rajanpur, 01 in Sargodha and 01 case of dengue were reported in Khushab. All suspected cases of dengue have been kept in surveillance and their tests are being conducted.

Anti-dengue squad under the Punjab Primary and Secondary Healthcare Department (P&SHD) destroyed dengue larvae at 2420 places in the province during continuous daily based surveillance. The Anti-dengue squad conducted surveillance at 401,605 indoor and 105,662 outdoor places to detect dengue larvae during the last 24 hours in different places. The P&SHD urged the people to adopt precautionary measures and keep their environment clean and dry to protect themselves from dengue. app

Karachi reported another death from dengue virus on Sunday, with over 2,000 people affected in Khyber Pakhtunkhwa after excessive rains left breeding sites for mosquitoes. The wards reserved for dengue patients in Karachi’s hospitals are packed to full capacity. A severe shortage of the widely used over-the-counter (OTC) drug paracetamol has hit the country coinciding with the high demand of the drug due to rising dengue and Covid-19 cases. Paracetamol is manufactured in Pakistan by GlaxoSmithKline and is sold under the brand name Panadol. In recent weeks the demand for the drug has increased due to rising dengue and Covid-19 cases.

Further, the outbreak of diseases in the aftermath of the devastating floods has further increased the demand. The shortage of Panadol is countrywide and patients are struggling to get hold of the drug.

A spokesman of the ministry said in a statement that the rumours of closing the production of medicines used for fever were absolutely baseless. The aim of spreading such baseless news was to play with innocent lives and benefit hoarders to enable them to make the buck. Life saving and daily use medicines were abundantly available in all four provinces including Gilgit-Baltistan and Azad Jammu and Kashmir, he said adding that even dengue, Malaria, fever, headache, cough and diarrhea medicines were also easily available in the country.

The ministry was committed to ensure the provision of quality medicines in the market. He said the ministry and Drug Regulatory Authority of Pakistan (DRAP) was persistently monitoring the situation to ensure uninterrupted supply of medicines. He said the large scale production of different brands of Paracetamol was continuing in the country. Ministry’s strict monitoring was aimed at ensuring uninterrupted supplies of all essential drugs.