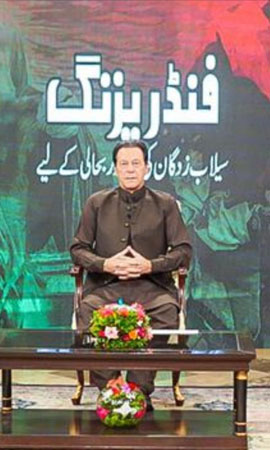 Pakistan Tehreek-e-Insaf (PTI) Chairman and former premier Imran Khan held a live telethon to raise funds from within the country and overseas Pakistanis for the rehabilitation of flood victims, with the party claiming that it has collected a huge amount of over Rs 5 billion during the transmission.

Speaking during Live Telethon which is being telecast by a number of TV channels, PTI chief Imran Khan said entire Pakistan had been affected by the floods generated by back-to-back monsoon rains. He said more than 1000 people died due to devastating floods and the damages are expected to cross Rs 1,000 billion. He said that the country would have to construct more dams to save people from such devastation in future. “The sole solution to prevent the catastrophes caused by flood is to construct dams.”

The PTI chairman said that he will make efforts for the restoration of ARY News transmission just like he is struggling for real independence besides assisting the flood victims across the country. He added that a fascist government has been imposed on the country that is attacking the freedom of press and speech.