AKDN responds to floods in Pakistan 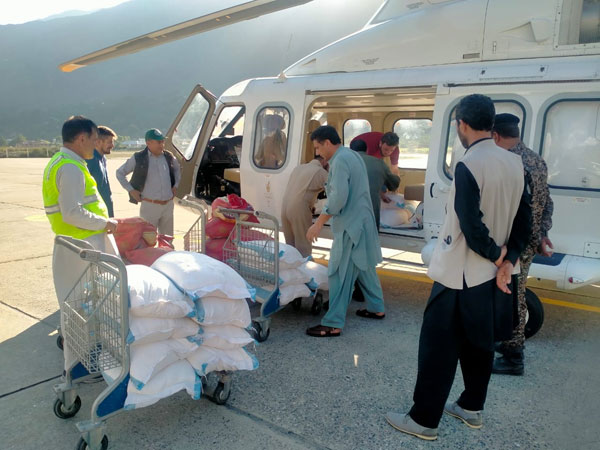 Initially AKAH’s early warning system and team of trained Community Emergency Response Team (CERT) volunteers safely evacuated more than 8000 people. Since then, it has provided humanitarian assistance to 329 families in Gilgit-Baltistan and Chitral District in Khyber Pakhtunkhwa. Besides food and non-food items, 212 tents were distributed amongst the families whose houses were damaged. AKDN helicopters carried out sorties to rescue stranded families in remote villages of Yarkhun Lusht, Power, Shost, Brep and Khuz in Upper Chitral and distribute thousands of kilograms of food and hundreds of kilograms of medicines. Similar sorties were conducted in collaboration with the Pakistan Army to provide relief to 120 families in Lower Chitral District.

Aga Khan Agency for Habitat is working closely with communities, local authorities, and other institutions to manage the situation on the ground. Deputy Commissioner of Upper Chitral, Manzoor Ahmed Afridi, visited the flood affected areas with the CEO of AKAH, Pakistan, Nusrat Nasab. The restoration of critical infrastructure remains a challenge and extensive resources will be needed for rehabilitation. AKAH has installed two cable cars in Yasin, District Ghizer and Lapsur Valley in Upper Chitral District connecting 640 people with the rest of the district to allow transportation of food and relief packages.

Aga Khan Health Services (AKHS) has provided emergency medical services to 300 people affected by floods in Gilgit-Baltistan. Emergency health camps have been setup in Bubur Village and Immit Valley in District Ghizer providing health services including psychosocial support and medicines to flood affectees. Awareness sessions on water-borne diseases and safe use of water were also held to mitigate the aftereffects of the floods.

In Sindh, the Aga Khan University is focusing on provision of health care in the flood affected areas. AKU teams have completed training of health care personnel and developed a supply chain for providing medical supplies. AKU will setup mobile medical camps and provide support to government hospitals and dispensaries with human resources and training. It will leverage the secondary hospital in Hyderabad and rural field sites in partnership with district health officials and local police authorities. Three teams have been sent to different camps with the assistance of local government officials in Matiari. Coverage will soon expand to Thatta, Dadu, Badin and Lasbella.