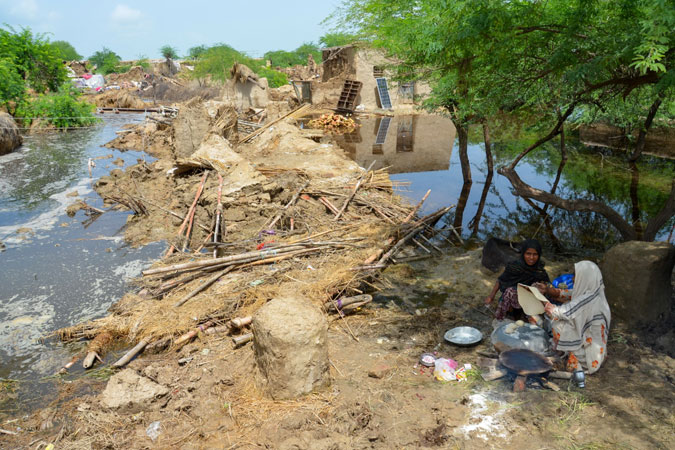 Floods continued to wreak havoc across the country on Sunday, particularly Khyber Pakhtunkhwa (KP) and Balochistan, leaving at least 119 people dead and more than 70 injured in the 24 hours. A total of 1,061 people have died so far, with 74 deaths reported in Sindh, 31 in KP, six in Gilgit-Baltistan (G-B), four in Balochistan, and one in Punjab and Azad Jammu and Kashmir (AJK). According to the data released by the National Disaster Management Authority (NDMA), 32 children, 56 men and nine women are among those who died in the flood after the rains, while the number of victims has reached 5.77 million.

Over the past 24 hours, nearly 0.95 million houses and 0.72 million livestock were flooded while 0.27 million houses were destroyed and 3,116 kilometres of highways and 149 bridges were washed away. According to estimates, 0.49 million people in Sindh, 0.45 million in Punjab, and 0.36 million in Balochistan have been affected by floods. The Pakistan Telecommunication Authority (PTA) announced on Sunday that various private mobile network services had been restored in the provincial capital of Balochistan, while efforts were underway “to restore services in other affected areas”. Earlier this week, as the unprecedented vicious attacks triggered by climate change had continued unabated, leaving many marooned, the environmental crisis had robbed Balochistan of digital connectivity after almost cutting it off from the rest of the country physically.

Already battered by flash floods, the province had lost communication with the rest of the country after overnight rains as the country struggles to cope with the humanitarian disaster, officials had said on Friday. The destruction of infrastructure and breakdown in communication links adds to the difficulties faced by the authorities in rescue and relief efforts in the region. The air, road and rail networks in Balochistan are already suspended, cutting it off from the rest of the country. “Due to torrential rains and flash floods in Balochistan optical fiber cable, voice and data services have been impacted in Quetta and [the] rest of the main cities of the province,” Pakistan Telecom Authority (PTA) had said on Twitter.