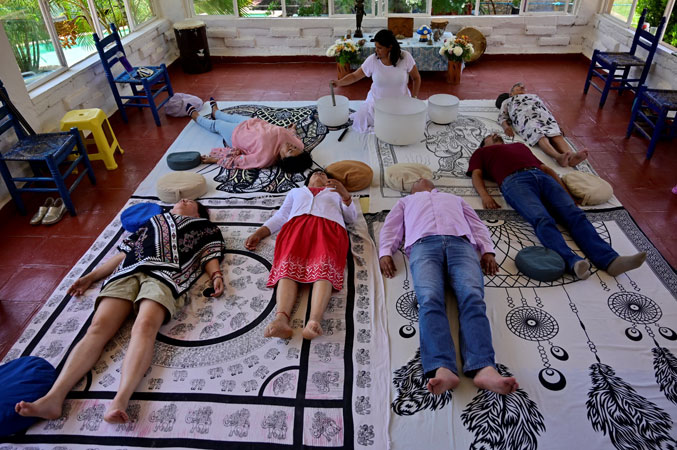 With restorative rituals, yoga retreats and psychedelic experiences, Mexico has become a magnet for spiritually minded tourists seeking an alternative vacation far from the troubles of the modern world.

While many visitors head straight to the beach, a different type of tourist chooses the village of Tepoztlan, a haven for artists and intellectuals an hour’s drive from the capital. Some of its residents once came for a short stay and found it hard to leave. “I love the vibes here,” said Ania Bitiutskaia, a 31-year-old Russian living at the foot of the Tepozteco Mountain, the legendary birthplace of the Aztec feathered serpent god Quetzalcoatl.

“People are more relaxed, more spiritual,” she added, browsing an organic market where the sound of a folk guitar and drum beats filled the air.

“I don’t see much news. I almost live in the mountains,” Bitiutskaia said, adding that she prefers to know as little as possible about the war in Ukraine.

The special vibes come at a price: costing upwards of $50-60 a night, Tepoztlan’s hotels are more expensive than those in many parts of Mexico, which welcomed nearly 32 million foreign tourists last year. Visitors can also stay in holistic centres offering yoga and meditation. “Since the pandemic, many people have come to live in Tepoztlan… foreigners as well as people from Mexico City who realized that their energy would be blocked,” said Alizbeth Camacho, of the Luz Azul (Blue Light) holistic centre.

Camacho offers guests “aura pictures” to visualize their energy, karma and chakras. Mexico’s new age tourism dates back to the 1970s, when the anthropologist Carlos Castaneda sold millions of books about the teachings of an Indigenous Yaqui shaman.

‘INNER JOURNEY’ — for some visitors, a vacation in Mexico would not be complete without a different kind of trip – hallucinogenics. American author Robert Gordon Wasson paved the way in the 1950s by revealing the secrets of a traditional healer, Maria Sabina. Sampling peyote is still possible with Indigenous communities such as the Wixarika, who use the mind-bending drug derived from a cactus in their religious rituals. And in the mountains of Oaxaca, guides like Pedro Ramirez offer the chance to try magic mushrooms at more than 2,500 meters above sea level. “It’s going to be an inner journey,” said Ramirez, leading a group of Mexicans and foreigners to a clearing in the village of San Jose del Pacifico. “You might be scared at first, but after 10 to 15 minutes you’ll laugh and maybe cry a little,” he added. Araceli Perez said she decided to try the mushrooms following the deaths of her husband, a doctor, from Covid-19 in 2020. “I’m looking for answers and acceptance,” she said. “I want to live and no longer just survive as I think I was doing,” she added. Another major attraction on Mexico’s new age tourism trail is the temazcal, a kind of Mesoamerican sweat lodge that guide Nicolas Lopez said can “awaken our spirit, our soul.” Near the Mayan pyramids of Palenque in the southern state of Chiapas, visitors enter Lopez’s heated chamber filled with the aroma of incense and dance to the sound of a tambourine. “It’s something sacred, pure,” 30-year-old Mexican tourist Valeria Landero said after experiencing the purification ceremony with her husband and teenage daughter. “It’s about letting it all out, the illnesses, all the bad things and bringing me pure positivity,” she said.