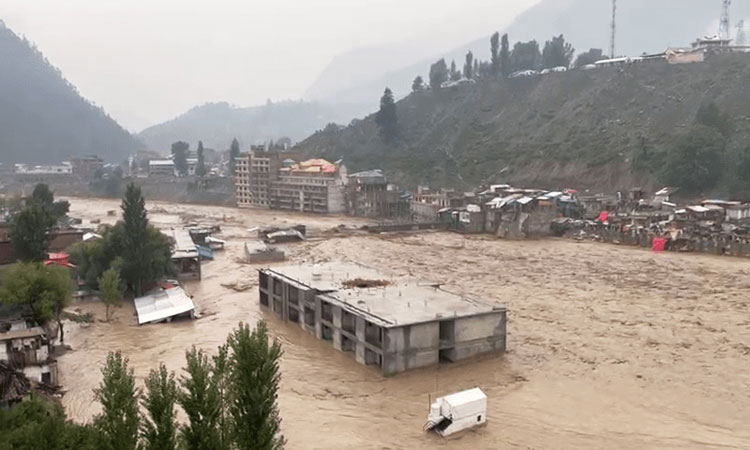 The Khyber Pakhtunkhwa government Friday imposed rain emergency in many districts, including Swat, as flash floods triggered by torrential rains have wreaked havoc in most parts of the province, killing at least 193 people.

The rain emergency, which came into force with immediate effect, will remain in place till August 30 as the Flood Forecasting Division (FFD) has warned of a “high level of flood” in Khwaja Khela and associated rivers/ tributaries of Swat River.

Besides Swat, the flash floods also played havoc in Shangla, Mingora, Kohistan, DI Khan, Kalam valley Hazara division and other areas of the province. A viral video on social media showed a multi-story hotel in Kalam valley was swept away by flood waters. Gushing floods flowing with bullet speed swept through houses, restaurants, and buildings perched on the river banks in Swat, as stunned pedestrians looked on from a distance.

According to Provincial Disaster Management Authority (PDMA) at least 193 people have died and 251 injured due to rains and floods in KP during the ongoing monsoon rains.

At least 19,748 homes, hotels and other buildings have been damaged in the province due to flash floods, said the PDMA. Besides infrastructure, the heavy rains and flood also left at least 959 animals dead across the province.

The emergency was imposed on the recommendation of the district administration and the Provincial Disaster Management Authority (PDMA) as KP Chief Minister Mahmood Khan instructed authorities concerned to accelerate rescue and relief activities. 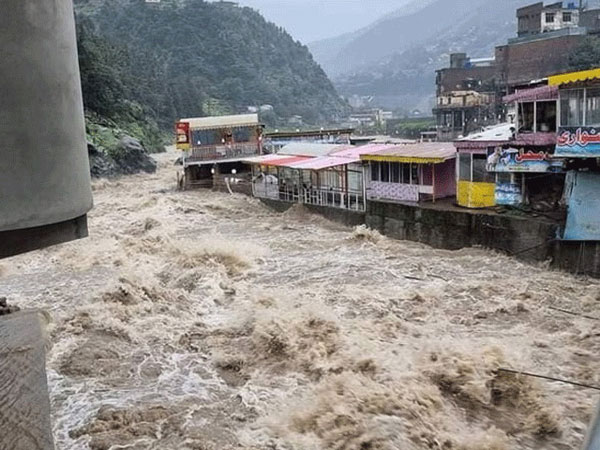 CM Mahmood further instructed the authorities to provide food, water and other essential items to the flood victims on an emergency basis.

“The concerned district administration should ensure access to every affected person, and all possible efforts will be made to compensate the losses of affected families”, the CM said, adding that the KP government stood with the victims in their time of need. He further stated that all resources would be utilized to help rehabilitate the flood victims and that orders have been given to the district administration to work on the affected infrastructure. The Chief Minister’s Special Assistant for Information, Barrister Muhammad Ali Saif has said that 10 citizens died due to the recent rains and floods, which occurred in Swat, Chitral, Dera Ismail Khan, Tank and Dir.

“The provincial government has declared the three most affected districts as calamity-hit where relief operations are ongoing. Population in sensitive areas has been shifted to safer places,” he stated. 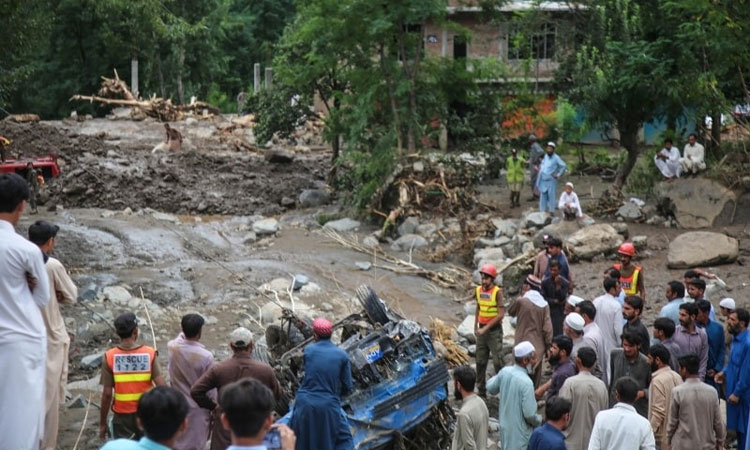 In two districts of Hazara division, the number of people who died due to floods rose to 21. At least 14 people were washed away in the flood relay in Mansehra’s Kaghan valley, after which 10 bodies of women and children fished out from the river Kunhar.

In another incident five brothers were washed away in the flood in Kohistan Debir, while in Kohistan Patan, three women died and two children were injured after their house damaged by flash floods.

The electricity distribution system was disrupted in Swat due to the floods as damage to transmission lines caused electricity suspension in Matta, Khwaja Khela, Madin, and Shangla.

Attempts at relief and rescue continued in other parts of the province, with the Bannu Road in Dera Ismail Khan being cut at two places to save the city from inundation. Flood water was cut off near Sanghar on Chashma Road. Band Korai, Sanghar, York, Shurkot and many other areas including Thana Saddar, however, remained flooded. The district administration of DI Khan said that there was no threat to the city but precautionary measures were being taken. Meanwhile, an emergency was also imposed in the district of Charsadda, with educational institutions closed till August 30.

The deputy commissioner of Charsadda cancelled the leaves of all district officers and personnel due to the possibility of flooding. In view of the flood situation, the Charsadda district administration also carried out relief activities and shifted residents from low-lying areas to safer locations.

Likewise, the deputy commissioner of Mardan has also imposed “flood emergency” in the district in view of the warning issued by PDMA. Kalam’s iconic New Honey Moon hotel collapsed and was washed away by the raging floods as KP declared an emergency at the hill station. The hotel was located on the bank of the Swat River in Kalam. It was evacuated timely, and no casualties were reported. Other hotels near the river were also cleared out following the incident.

Meanwhile, a National Highway Authority (NHA) alert has been issued for tourists for the towns of Bahrain and Kalam in Swat. The alert said that a flood-like situation has developed in the district due to heavy rain. It said that the Bahrain-Kalam section of the N-95 and N-90 highways have been severely damaged by the downpour.

A spokesperson for the NHA said that flooding has affected the Bahrain bridge as well as the approach road and that aside from the Bahrain-Kalam road, the surrounding tracks have also been impacted.

“Tourists and locals in Swat should avoid unnecessary travel,” the spokesperson said. “Extraordinary flood situation is witnessed in River Swat at under-construction Mohmand Dam Project site. Resultantly, flood water entered the diversion tunnels breaching and overtopping the protection dyke, which adversely affected the construction activities at the Project. Exceptionally high water flows are expected in River Swat in the coming hours as well. With this in view, project management has taken precautionary measures and is closely watching the situation to mitigate any further damage,” a statement issued by WAPDA said.