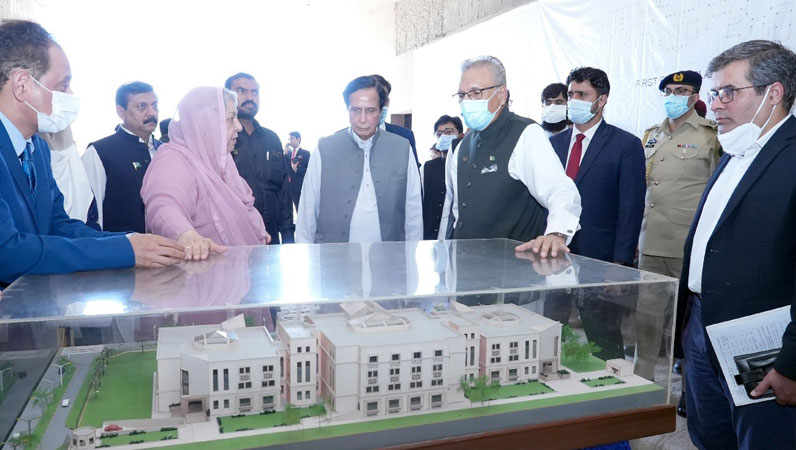 President of Pakistan Dr Arif Alvi and Chief Minister Punjab Chaudhry Parvez Elahi visited Fatima Jinnah Institute of Dental Sciences at Jubilee Town on Friday. Both inspected various sections to review the pace of work. The CM directed to early complete the project and announced to give it the status of Fatima Jinnah Dental University.

While pointing out that the scheme was approved in his previous tenure in 2005, the CM regretted that the PMLN government made no significant progress. Like other public welfare schemes, this project also succumbed to political enmity. ‘The project could not be functionalized after a lapse of 17 years and this resulted in increasing the construction cost;’ he commented and termed it an enmity with the people. Failure in timely completion of healthcare schemes is criminal negligence; he noted and pointed out that the timely completion of this project would have resulted in the provision of quality healthcare facilities to the people. I have given priority to the health sector whenever Allah Almighty has allowed me to serve the masses; he added and directed C&W and NESPAK officials to complete the project without delay. It is my mission to provide quality healthcare facilities to the doorsteps of the masses and Fatima Jinnah Dental University would provide modern treatment facilities to the patients, he added. The health secretary briefed about the project details. Health Minister Dr Yasmin Rashid and others were also present.

The CM disclosed that the solar system would be installed at Orange Line Metro Train stations and added that the first electric buses pilot project would also be started in the provincial metropolis. The government would provide world-class travelling facilities to citizens in environment-friendly buses, he concluded.

Chief Minister Punjab Chaudhry Parvez Elahi has sought a report from IG police about the molestation and pornography scandal in Layyah and directed to hold a high-level inquiry to investigate the matter. All the accused should be brought under the grip of the law through comprehensive investigations along with the provision of justice to the affectees; he said and made it clear that such an incident is intolerable. The accused, involved in this gruesome crime, would be given exemplary punishment while fulfilling all the requirements of justice, he added.

Meanwhile, the Layyah police have arrested an accused Muhammad Abrar alias Babar and CM has directed that other accused should also be nabbed.

Chief Minister Punjab Chaudhry Parvez Elahi has condoled the death of hockey Olympian Matiullah Khan and extended sympathies to the bereaved family. In a statement issued on Friday, the CM paid tributes to the services rendered by the late Matiullah Khan for the promotion of hockey and added that he brought laurels home with his exceptional performance in international matches.

Chief Minister Punjab Chaudhry Parvez Elahi has said the role of the youth is pivotal in the development of the country as they have brought laurels home in every sector of life with their abilities.

In his message issued on Friday, the CM asserted that ample resources and opportunities would be provided to empower the youth. The nation attached a lot of expectations from the talented youth as their role is important in the development of the country. It’s sanguine that Arshad Nadeem and Noh Butt have proved their talent in Commonwealth Games by winning gold medals, he added.