Journalist Anas Malik was ‘physically assaulted’ during disappearance in Kabul 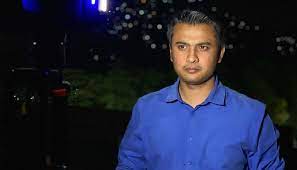 Journalist Anas Mallick who went missing in Kabul on Thursday, has admitted that he was “physically assaulted” during  his short disappearance.

The journalist from Islamabad who works for the Indian news network WION reappeared on Friday, with the Foreign Office in Pakistan and the Afghan ambassador both tweeting that Mallick was “safe” and “back in Kabul.”

After a few hours, WION asserted in a report that Mallick had actually been “abducted by the Taliban.”

In a video report, Anas told WION, “I was picked up yesterday by what we know are the Taliban in Kabul”.

“Twenty-one hours of ordeal has finally come to an end,” he said, adding that he, as well as a local producer and driver who were with him while they were filming general shots, was picked up on Thursday, a day after he had arrived in Kabul to cover the one-year anniversary of the Taliban takeover and “how Afghanistan is now”.

Mallick continued: “After some while we were shifted from the place where we were intercepted to what we know was the GDI, or the Grand Directory of Intelligence, the GDI unit the Afghan Taliban.”

He said he and his colleagues were “questioned thoroughly” on their journalistic credentials and were also asked “personal questions”.

Around 9:30 p.m. (AFT) on Thursday, the journalist claimed he was moved to a room and informed he would be free to leave “upon the translator or the tarjuman (representative) arriving up.”

On Friday at 10:10am (AFT), he said that he was finally “dropped off,” or given permission to leave without restriction.

Mallick emphasised that he and his colleagues had all necessary press credentials and were accredited by Delhi for the assignment in Kabul.

My press credentials, though, “are still not with me. He told WION, “I still don’t have the letter of accreditation or the permit.

He added that the local producer and his driver were still being “tained by the Taliban.”

WION later tweeted that they had both been “released after incarceration for 42 hours.” The message included images of men’s exposed, battered backs.