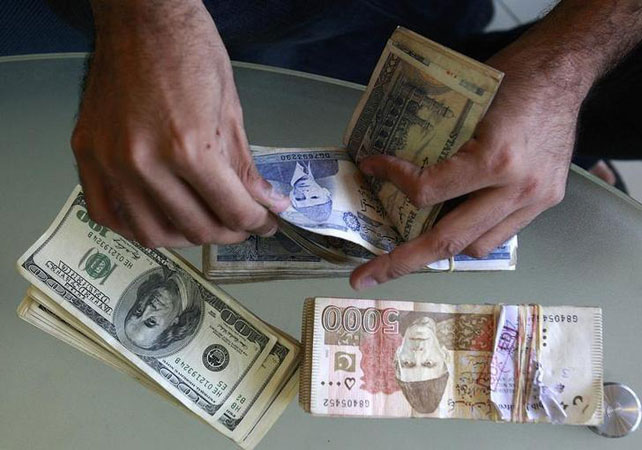 The Pakistani rupee recorded its highest single-day gain against the US dollar as it continued the uptrend for the fourth successive session in the interbank market as import pressure witnessed a decline in July, a private TV channel reported.

In the open market, the greenback lost Rs14.50 and closed at 226, according to the Forex Association of Pakistan. The dollar started losing ground on Friday after the rupee – ranked among the world’s worst performing currencies – plunged for 10 straight sessions during the last days of July – and depreciated around 5% just last week. According to Arif Habib Limited, it was the rupee’s highest single-day gain in absolute terms.

FAP Chairperson Malik Bostan said that the lower import bill for July had helped reduce the country’s trade deficit, which in turn had eased the pressure on the rupee. According to Mettis Global, the remarkable recovery is “primarily attributed to the improved economic fundamentals as the import bill in July 2022 has been reduced to $4.86 billion, down by 38.31 per cent, compared to $7.88bn in the previous month”. Accordingly, the trade deficit for July narrowed to $2.64bn compared to a deficit of $4.96bn in the preceding month, a slump of 46.77pc.

Bostan said part of the recovery was also based on expectations that the International Monetary Fund (IMF) would release its tranche soon. “The difference of Rs10 between the rates in the open market and interbank market due to the smuggling of dollars into Afghanistan has been equalised because of tighter security at the border,” Bostan said. “The transfer of dollars into Afghanistan has stopped, the effect of which has strengthened the rupee.”

“Confidence-boosting comments from the IMF team have improved sentiment, plus a drop in oil prices and higher inventory will impact the current account favourably and are being factored in bringing PKR more in line with its REER value,” said Komal Mansoor, head of research at Tresmark, a web-based terminal for financial markets.

Alpha Beta Core CEO Khurram Schehzad said once funds were received from the IMF, it would unlock multilateral inflows, including from friendly countries. The inflows, coupled with global and local recession impacting or reducing oil, food and commodity prices, would lead to a much lower import bill, thereby lowering demand for dollar outflows, he said. “This should help improve the PKR against the dollar, at least for some time.”

Mettis Global Director Saad bin Naseer said the PKR was stabilising over the bleak demand outlook amid rising inflation as seen in the slump in fuel and cement sales during July.

Referring to the IMF’s statement that Pakistan has completed all prior actions for the seventh and eighth review, he said the clarity on that front and expected inflows were also supporting the local currency.

“However, further strengthening of the US dollar or a flare-up in tensions between US and China over Taiwan could prove as downside risks for the rupee,” he added. Data from the Pakistan Bureau of Statistics (PBS) has shown that imports have plunged by 38.3% over the previous month as a sizable cut in imports was witnessed after the government banned a number of luxury items to manage the shortage of dollars in the economy. Not only did imports decrease, but exports, too, witnessed a plunge. However, pressure on the rupee eased as the trade deficit reduced by 18.3% to $2.64 billion in July, 2022 against $3.235 billion in July, 2021. In June, 2022, the gap was at $4.96 billion.