* In all these deep and philosophical thoughts, Mah Zaib was lost in a labyrinth 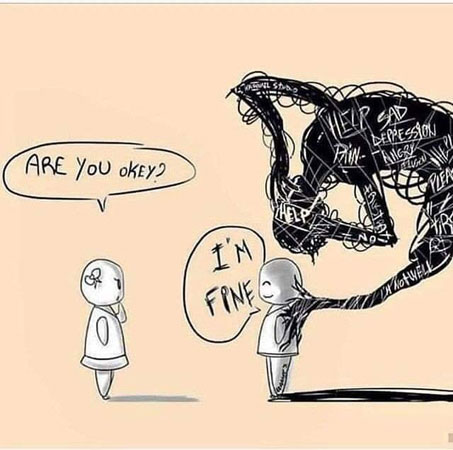 One fine morning, Mah Zaib and Shay are busy with a thought which has been nagging their minds for some time now. The thought is why people take their lives. This question is like a huge field open up to numerous interpretations. ” How are your vacations going in your village?” Shay with a partly melancholic voice asked Mah Zaib. Mah Zaib lives in a village named refugee and Shay lives in a town named Graveyard. They both are undergraduate students studying Pakistan studies at Jinnah university Karimabad. “Everything here seems genteel, cool, and refined. People out here are humble, thoughtful, and sensitive. My days here are going fine. I sleep early and wake up early with peaceful sleep. And I hope you would be fine at university.” Said Mah Zaib on the other end of the phone. What is interesting about them is their mutual understanding of life. They both engage in enthralling and equally intellectual debates. Like one day, they both discussed the mental life of their villages. Both villages are poles apart. I’ll try to cover, and for that matter eavesdrop on their private call to let you know their thoughts.

” Hello Favorite.” Shay called her after sometime. ” Hello. Where have you been? I have been waiting for your phone call.” It was like Mah Zaib’s voice was teeming with a sense of insecurity. With the desperation she asked him it was evident that she was missing the intellectual company of Shay. ” I was here. Just working on something we have had in our mind. Suicide.” To assuage her desperation and get her engaged in a task, Shay threw this piece of work they have to do. ” Oh, that is really great. Thanks for reminding me. Actually I have not forgotten our task but have been caught up in my village with some important things to attend to. I hope you have done good research. But, you know, I would like to merely listen to you. Your thoughts about suicide and why people take their lives. One because your voice is cloyingly sonorous and that makes me thoughtful. Second you have a great amount of knowledge.” Mah Zaib said with confidence. ” I might agree with your first statement. Unfortunately with the second statement I can’t. But without any further ado, let’s talk about suicides and motivations which steer a human being to take his own life.” Shay had a desperate wish to let her talk but she had nothing to say except to listen to him. ” please shay, go on. All to you. I’ll listen to you.

Shay began to talk, ” in this world we have two questions to answer. First, who has brought us here? Second, that now we are here, how to live our foisted lives. I guess religion and philosophy have said much about why we are here and who has brought us here. And how to live a meaningful life. But I think sometimes, religion and philosophy both have badly failed at answering the second question: how to live our lives? With what morality and guidance should we lead our lives? Religion and philosophy answer this question in ambiguous terms. But nonetheless religion provides hope to us, and tethers our adrift selves to meaningful docks. What religion misses is the empirical part of our curiosity. We need evidence and a sense of candid honesty. Something which should tell us everything.”

In all these deep and philosophical thoughts Mah Zaib was lost in a labyrinth. ” Your first two questions are nice. But keep your ideas a bit simple to let me understand them.” Mah Zaib said.

Shay resumed, ” I guess I became over philosophical. I apologize for that. Now let me make it simple. I can quote here a multiplicity of writers ranging from Martin Heidegger, Carl Jung, Sigmund Freud, Victor Frankl and many more. But here on our phone call I will share my own ideas. For me, when a human takes the decision to take his or her life, he or she does not take that decision out of blue and thin air. But behind that there are several motivations mostly precipitated by our despicable society. When a human cuts his or her throat, hangs him or her to a fan, jumps from a skyscraper, breaks into a fast train, it is not that he or she does that impulsively. I believe the motivations needed for committing suicide are enormous. Little by little these motivations accrue to buttress the foundations of that decision. I guess a man or a woman suicides for many reasons but we only trace the apparent reasons: a break up, financial problems, ethnic marginalization or sectorial ghettoization

Let me share with you what I saw on the internet some time ago. Someone sent me a meme. A girl was asking a boy, ” are you okay?” as usual the boy replied, ” I am fine.” But what was sadly captivating in that picture was a black monster harshly clutching the head of that boy. Across the black hands, back and neck of that monster was written, ” help, pain, sad, depression, angry…” This picture shook my mind with lots of concussions. I felt when we say, ” I am fine,” this does not mean I am fine but clearly suggests there is no one to listen to me and tap a hand on my shoulder, hug me and gently whisper into my ear, ” I am here. Don’t worry. We will make everything fine.”

” here in lies the rub.” After a long pause Mah zaib broke her silence and said. ” You illustrated such a sad picture which almost brought tears to my eyes. Imagine. You are inundated by the flood and blizzard of depression, anxiety, and sitting outside, having a cup of tea, with a cigarette, someone suddenly joins you and says, ” are you okay,” and you fake a smile, and reply, ” I am fine.” The saddest part is that the other person believes it. Or begins to judge you. Life is strange.

” so nice Mah Zaib. I think you must express your ideas and I believe you can talk on this topic with a great deal of knowledge. But let me say something about depression. Depression has a horde of meaning. The word depression spans almost all fields of knowledge. But in every field its connotations are informed by despondency, dejection and somber feelings. In psychology, the word depression suggests lack of vitality, will to do anything, feelings of severe despondency and dejection. Depression is like a huge island where the wind of emotions does not blow, where the trees of feelings are dry and dead, where birds don’t sing love songs but croon elegies of unknown deaths.

Mah Zaib wanted to say something but her voice was cut by weak networks. The refugee village has no internet. The mobile networks are weak. So it happens. The call gets interrupted intermittently. ” I was saying, ” Mah Zaib said when networks returned to its erstwhile power, ”that depression is not what we think about it. We always connect depression with sadness, tears, and self-infliction. Depression could be seen in some other frames as well. Like sometimes I feel depression is doing what you do daily; your mundane works and et cetera. You wake up early without a good sleep. You take a shower. You head to your office or university. You post pictures on social media. Share status on WhatsApp. You smile, laugh and even banter all day. But at the back of your mind, like termites, something is devouring you gradually. And one day this slow process leads you towards suicide. Your life is called a day eternally. And you know. ” what Mah zaib” ”Life is strange.”

Shay was amazed listening to her. Shay always knew she was a genius but never let her know that. This time his eyes were tearful, and he was missing her. ” You nailed it Mah Zaib. But I guess we must drop the call now since networks are impeding our insightful discussion. But before we drop Mah Zaib can you let me imagine now in what kind of a place you are sitting in Refugee village.” The phrase drop the call always made both of them wary. They always thought there are so many impediment to severe their relationship. But they always bolstered the umbilical cord of their relationship which they called, mutual understanding of life with their sensible discussions. ” I am sitting beside a lovely lakeshore. All four sides of me there are terraced hillside, and a bit far off me there is a deep forest. Some children are playing impish games. ” Mah zaib had a gentle smile on her face which puckered her lips. ” so nice. I hope one day I will join you and hold your hand to feel the serenity of this place. It would be so resplendent and incandescently warm. So bye for now. See you soon. In our next call you have to lead the discussion and express your ideas on suicide and depression with a bit statistics and life experiences. ” Hokay Shay. I would try. I have read a few reports. We have done a survey on mental health in our village and I would also study it in puview of psychology and some other fields of knowledge. So shay, bye for now.” Continued