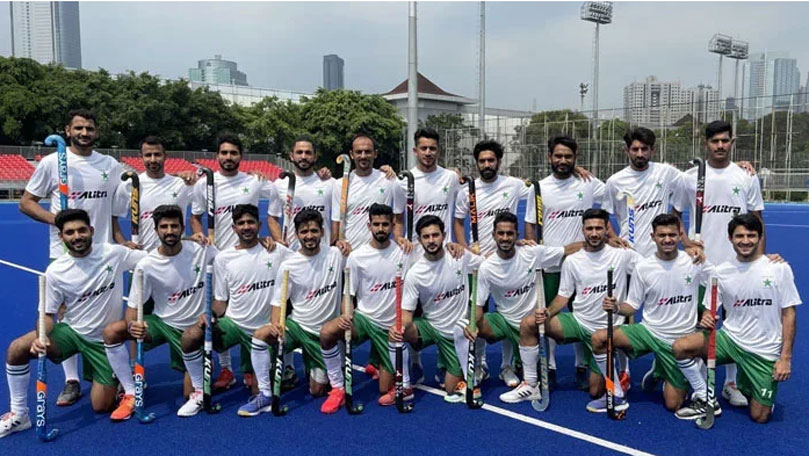 BIRMINGHAM: Pakistan and South Africa hockey teams settled for a thrilling 2-2 draw in their opening match of the Commonwealth Games in Birmingham on Saturday. The first quarter was quite entertaining as both the teams played aggressively. But it were South Africa, who took the lead in the 14th minute when Connor Beauchamp converted a penalty corner. In the 25th minute, Pakistan got their first penalty corner and levelled the match superbly through Rizwan Ali. South Africa immediately created a circle entry but they lacked the cutting edge to maximise the opportunities.

At the end of the first half, the match was levelled at 1-1. South Africa, however, remained the dominant side with more shots, circle entries and penalty corners but Pakistan’s defensive unit managed to thwart their moves. In the third quarter, the two teams were a little wasteful in possession, not making the most of their possession. Pakistan got their second penalty corner of the match but the South Africans kept it at bay and the game remained even. With just a few seconds left on the clock, Pakistan got a close chance but could not execute their plans. Thus the third quarter ended without a goal. South Africa earned a penalty stroke when an absolute rocket penalty corner from Guise-Brown struck the face mask of the Pakistan defender on the line. Guise-Brown took the stroke to make it 2-1 with six minutes remaining on the clock. Pakistan dominated the proceedings in the last few minutes. They got a penalty corner in the dying moments of the match. With just 20 seconds left Afraz put the ball in the back of the net to level the match.

After the match, Pakistan skipper Umar Bhutta sounded confident to qualify for the semifinals. “We played very good hockey against South Africa today. “We will try our best to win against New Zealand and make it to the semifinals,” he told media. Head coach Siegfried Aikman was also optimistic about Pakistan’s chances to advance to the semifinals. “We’ll try not to repeat our mistakes in the next match,” he said. Pakistan will take on New Zealand today(Sunday) in their second match. Then, they will face Scotland on August 3 in their third match. In their last group match on August 4, they will face six-time Commonwealth Games hockey champions Australia.

The top two teams will move to the semifinals, taking place on August 6. The final will be held on August 8, the last day of the multi-sports event. Hockey has been played at the Commonwealth Games since 1998 and in that first year, it was Australia who dominated, winning gold in both the men’s and women’s competitions. Malaysia men and England women took silver, while England men and New Zealand women won the bronze medals.

Pakistan have never won a gold medal at the Commonwealth Games in the past. Their best performance was during the 2006 event, in Melbourne, when they won the silver medal. Pakistan also won a bronze during the 2002 games in Manchester. The Commonwealth Games has a rich sporting tradition that goes back to 1930. In its earliest edition, the coveted event featured 11 nations and 400 athletes. Now, in its 22nd edition, over 5000 athletes from 72 nations and territories will are participating in the English city of Birmingham in the event known as the Friendly Games.