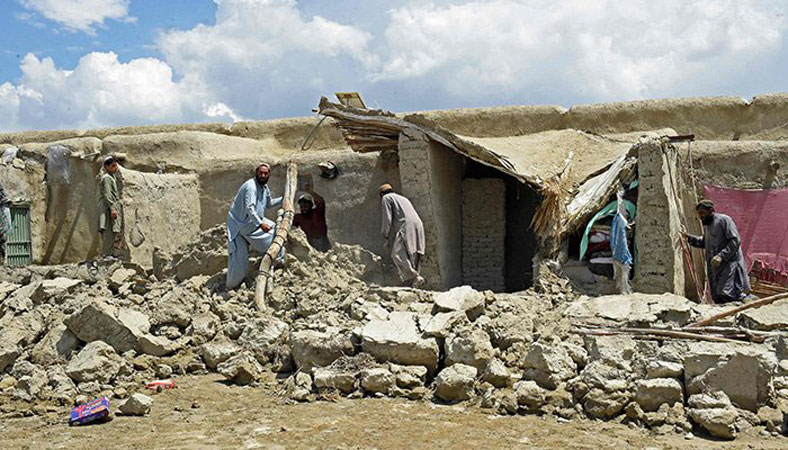 The monsoon spell in the country has hit Balochistan hard, killing over 100 people and injuring scores and leaving thousands of homes completely demolished.

Addressing a press conference in Quetta on the devastation caused by the rains, Balochistan Chief Secretary Abdul Azai Aqili told journalists that as many as 111 people had lost their lives so far as heavy downpour continued to hit the province. He said the rains had completely tore down 6,077 houses and more than 10,000 homes were partially damaged – and these are just the official statistics.

Aqili said that 16 dams sustained minor or major damages during the rains, while crops and gardens stretching over two acres of land were also harmed. “The recent monsoon spell brought more than 500% [as compared to earlier] rain and also severely damaged 2,400 solar panels,” the chief secretary said. He noted that 10 districts in Balochistan were affected due to the rains, but fortunately, the situation at the Kech River was under control. The province’s top official also mentioned that 650km of roads were damaged in the rains.

The route from Karachi to Quetta has been closed for heavy traffic, he said, urging people to refrain from unnecessary travel – as it was in their best interest.

The chief secretary said that the Pakistan Army, Frontier Constabulary, and civil administration were conducting rescue operations, but damaged roads are hampering the efforts. Aqili mentioned that 17,000 people have been rescued so far and rescue operations are underway to move 2,000 people to secure locations. The top official added that the leaves of all government employees have been cancelled in the wake of the disastrous rains. During the presser, a National Highway Authority official mentioned that water in the Hub Dam overflowed and damaged the bridge. He said new bridges will be constructed on an “emergency basis” in Hub.

Repair works are also underway on N-25 and M-8 roads, he added. But Balochistan’s plight might not end there as the Pakistan Meteorological Department (PMD) has forecast more rains in the province. The PMD said from July 27 to 31, rains and thundershowers are expected to hit Quetta, Chaman, Harnai, Zhob, Ziarat, Barkhan, Loralai, Bolan, Kohlu, Kalat, Khuzdar, Lasbella, Naseerabad, Jaffarabad, Sibbi.

In a briefing to Prime Minister Shehbaz Sharif during a high-level meeting on rains, Chief Minister Sindh Murad Ali said that 93 people lost their lives and 59 were injured in the rains. The chief minister said that the province recorded 369% more rains this year and Karachi – the economic capital of the country that was paralyzed for some days during the rain – received 556mm rains.

CM Shah said that almost all districts received rain in the three spells that hit the province, and among the 93 deaths that were recorded in Sindh, 47 were children.

He said that 15,547 homes received minor damages and 2,807 houses were completely destroyed. Crops stretching over 89,213 acres were severely damaged, CM Shah said. In light of the devastation, the prime minister has constituted a committee to assess the damage caused by monsoon rains and floods. Chairing a meeting in Islamabad, he said the committee comprising of federal ministers should visit all the affected areas in the next four days. The prime minister said short, medium, and long-term plans will be formulated in the light of the recommendations of the committee on the fourth of next month. PM Shehbaz announced to enhance the compensation of injured people from Rs50,000 to Rs200,000.

Official present during the meeting informed the participants that so far, 356 people have died across the country due to floods and rains. Apart from Balochistan and Sindh, the officials said one person was killed in Islamabad, 69 in Khyber Pakhtunkhwa, 76 in Punjab, eight in Gilgit-Baltistan, and six in Azad Kashmir, while the number of injured people is 406.

The Inter-Services Public Relations (ISPR), in a statement, said that two army aviation helicopters have been flown from Karachi to Othal, and Lasbella areas.

“These helicopters had attempted [to fly] during last 48 hours, but could not fly due to bad weather conditions. The helicopters will now shift stranded people to safer places and also transport necessary relief items,” it said.

Gawadar’s general commanding officer visited the Othal area to oversee rescue and relief efforts, while the senior local commander at Khuzdar will also visit flood-affected areas of the district today.

Ground rescue and relief teams are busy in Othal, Jhal Magsi shifting people to safer places and provision of food and water to local residents, the ISPR said.

The military’s media wing said that doctors and paramedics are providing medical care to affected people. Moreover, it said that coastal highway has been opened for all kinds of traffic. “Efforts are in hand to repair the damaged communication infrastructure and restore utilities. The protection bund in Turbat which was breached has been repaired.” In Punjab, the ISPR said that troops are assisting civil administration in relief efforts in Dera Ghazi Khan after flash floods and hill torrents. Two medical camps have been established by the army to provide medical care to residents affected due to floods, it added. For Sindh, the ISPR said that apart from de-watering efforts in Karachi, troops are busy in relief efforts in Jamshoro and Gharo areas. The ISPR also said that troops were assisting the civil administration in relief efforts in Dera Ghazi Khan due to “flash flooding/ hill torrents”.