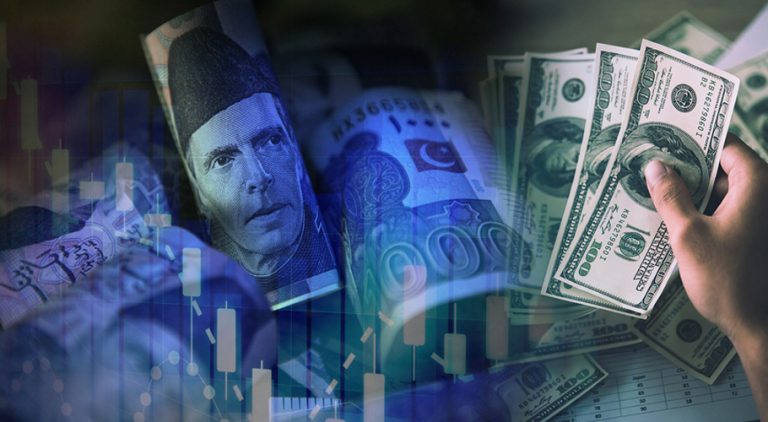 The US dollar’s upward trend persisted unabatedly on Thursday, as the greenback traded at Rs239.9 per rupee as the government failed to appease importers concerned about the country’s dollar inflow. After the election of CM Punjab Parvez Elahi, the dollar continued to rise in value amid political unpredictability regarding the federal government’s future and the IMF deal.

The rupee lost 3.98 during the intraday trade. The local unit closed at 236.02 per dollar on Wednesday, falling by 1.31% during the session.

The forex dealers said that the banks are selling the greenback at Rs240.5 while in the open market, it being sold between Rs240 and Rs242.
With the latest day-to-day drop, the rupee has cumulatively plunged almost 12% (or Rs25.07) in the past nine consecutive working days.

The State Bank of Pakistan (SBP) previously explained the 11-rupee change in the exchange rate in just two days as a result of the “market-determined exchange rate system,” which is a system in which the current account position, news stories, and domestic uncertainty all affect daily currency fluctuations.

In an apparent attempt to downplay the depreciation, the SBP said a “better measure” of the rupee’s strength is the real effective exchange rate, which takes into account the currencies in which Pakistan trades in inflation-adjusted terms.

According to former finance secretary Dr. Waqar Masood, the pressure on the rupee is caused by a number of factors, including the delay in the revival of the International Monetary Fund’s (IMF) programme, the disclosure of the financing gap, and the results of the Punjab by-elections on July 17.

the economic expert said the uncertainty in the financial markets increased after Finance Minister Miftah Ismail revealed that there is a gap of $4 billion which the friendly countries would provide. “Earlier, no one knew about it.”