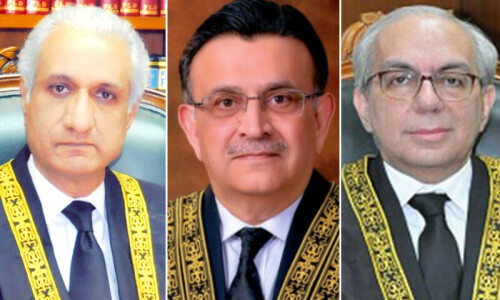 ISLAMABAD: Supreme Court Monday (SC) completed hearing into pleas of formation of full court for the hearing of the case of the Punjab chief minister’s election.

The decision on the formation of a full court bench will be announced today at 5.30pm.

The court has also ordered the presentation of Ch Shujaat Hussain’s letter in today’s hearing, which prompted the deputy speaker to reject 10 votes cast by PML-Q lawmakers during the Punjab chief minister run-off election.

Security around Rend Zone area  has been increased

Given the significance of the case, which has the potential to shake the echelons of power in Punjab and have repercussions at the Centre, it has been decided to make the Red Zone area security foolproof. The anti-riot force will be deployed as well, and the administration is considering bringing a prisoner’s van and water cannon to deal with any emergency situation.

The entry of all political leaders to the Supreme Court has been banned for the hearing on the case related to the election of the Punjab chief minister.

On Saturday, the Supreme Court Lahore registry heard Pervaiz Elahi’s petition. The case was heard by a three-judge bench of the Supreme Court, led by CJP Bandial and comprised of Justice Ijazul Ahsan and Justice Munib Akhtar.

During its ruling, the Supreme Court appointed Hamza Shehbaz as trustee chief minister of Punjab until Monday (today), when the court reconvenes to hear the case. The Supreme Court barred Hamza from using his CM powers for political gain.

The CJP stated that the deputy speaker’s ruling was prima facie in violation of the Article 63-A verdict.

The court summoned the Punjab deputy speaker, who did not appear and was replaced by a lawyer. The court also served notices on Hamza, the attorney general of Punjab, the Punjab advocate general, and the Punjab chief secretary.

However, following the Supreme Court ruling, the coalition government objected to the three-judge bench, requesting the formation of a full court bench, citing the importance of the case.

Today, the coalition government plans to file a petition for the formation of a full bench.

Prime Minister Shehbaz Sharif spoke with PDM Chief Maulana Fazlur Rehman about filing a petition for a full court bench. Both leaders vowed to work together to move forward.

PML-Q President Ch Shujaat and Maulana Fazl also spoke on the phone about the case.

Later, on Monday, Jamiat Ulema-e-Islam petitioned the Supreme Court to become a party to the case.

During a press conference in Dera Ismail Khan on Sunday, the JUI-F chief stated that he would file a petition with the Supreme Court to become a party in the case.

He also requested the formation of a full court of the Supreme Court to hear the petition, echoing the demand of the PDM’s two major parties, the PPP and the PML-N.

Pakistan Peoples Party, on the other hand, has decided to join Pervaiz Elahi’s petition.

It has prepared the petition, which will be filed in court shortly.

According to the petition, the PPP has lawmakers in the Punjab Assembly, so the court should hear its case. It stated that the PPP supported the constitution and the rule of law.

In his petition, he asked the court to overturn the deputy speaker’s decision on vote counting during the CM election.

He claimed that the deputy speaker did not count the PML-ten Q’s votes because of his illegal and unconstitutional ruling. He insisted that the ruling violated the Supreme Court’s order.

According to Pervaiz Elahi, the deputy speaker’s decision violated Article 63-A as well.

The petition was filed by PML-Q lawyer Amir Saeed Rawn, and Lahore Registry Deputy Registrar Ejaz Gorayra and other staff rushed to their offices at midnight on Friday.

In an address to MPs on Friday night, PTI leader Fawad Chaudhary urged the Supreme Court to open the gates of justice to settle the matter.