Syra Yousuf has the sweetest birthday wish for daughter Nooreh 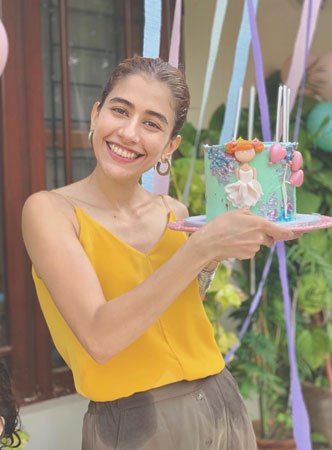 The Sinf-e-Aahan shared the heartwarming video on the visual-sharing outlet. Her caption read, “Happy birthday Nooru baba” Her clip is a montage of her daughter and the lovely moments which they had in the past. Netizens extended their birthday greetings to the girl. Her fellow celebrities Hira Mani and Minal Khan also wished her happy birthday as well.

It is pertinent to mention that Syra Yousuf takes to Instagram to share pictures of her heart-warming moments with Nooreh. The Ho Mann Jahan star married actor Shehroz Sabzwari in October 2012. She gave birth to Nooreh after two years. Their marriage came to an end in March last 2020 because of “irreconcilable differences”.

Earlier, the Tanhaiyan Naye Silsilay actor went on to say that she, her ex-husband and his family and ensuring Nooreh gets the love from both families.

“I have that support so I don’t think that I feel the challenges of a single mother.”

Her former husband had credited her for the good brought up of their daughter. “Yeh Syra ki hi tarbiyat hai (It is Syra’s good training),” he said. “I just enjoy with Nooreh, how can I raise her… When she’s a bit older and able to understand me, that’s when a father’s training will be involved. “Right now, she even sleeps with her mother, so her daily routine and her brought-up, the whole credit for it goes to Syra!”