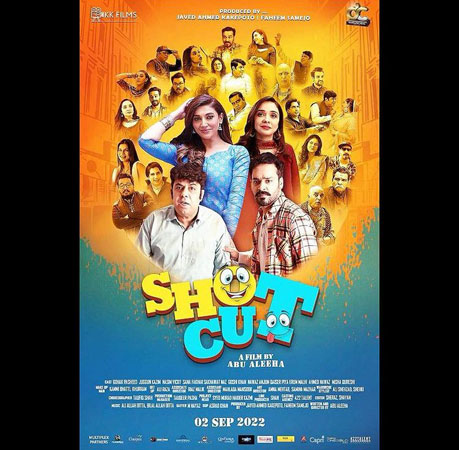 Situational comedy Shot Cut, previously scheduled for Eidul Azha, postponed its release but dropped a little nugget to retain the attention of fans.

The film’s hip hop OST is out now!

“We present to you Shot Cut’s soundtrack. Ali Allahditta’s music and Gohar Rasheed’s voice tell a tale that every Pakistani crushed by the weight of inflation and unfaithfulness will relate to,” read the description of the song. It features the cast on the roof, busting out some moves and vibing to the song. Patterned, matching tracksuits, blingy, shiny tops, caps, chains and shades – their getups scream hip hop to match the vibe of the song.

Though the music video doesn’t reveal much about the plot, it does seem to hint at a comedy with the OST’s lyrics and Rasheed’s tone. Written and directed by Abu Aleeha, Shot Cut is a situational comedy, an outlier in his career made-up of thrillers and horrors. The filmmaker is attracted towards comedy because he feels like it is the need of the time. Aleeha informed earlier that the story follows two lovers who are also low-tier theatre actors and have never gotten the spotlight. The film sees them resuming their lives after a 20-year gap, from the age of cheap theatre to a time where social media reigns supreme.

“However,” he added, “don’t expect any deep-rooted message from this film. It would be most gracious of you if you can deduce one, and I’d like to thank you for it, but the film is a mindless romp.”