I have paid homage to ‘Matrix’ and ‘Singham’ in ‘Quaid-e-Azam Zindabad’: Nabeel Qureshi

* Upon how Qureshi and Meerza decide the themes or storylines for their films, Qureshi told Fuchsia that he's never been a trend follower but their films are highly inspired 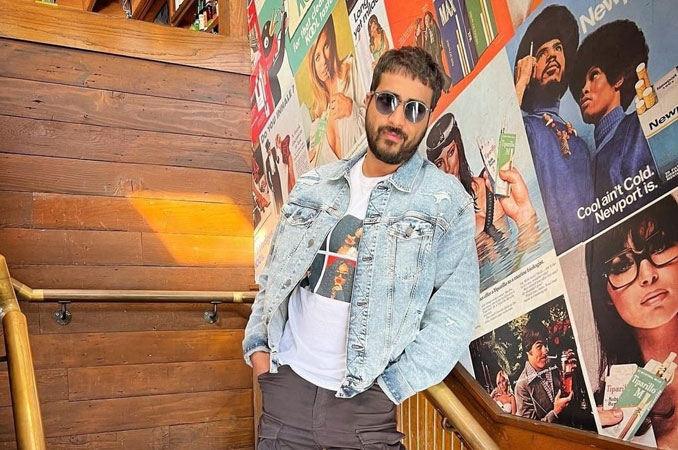 Filmmaker and screenwriter Nabeel Qureshi, who started his journey with college friend Fizza Ali Meerza, is currently basking in the success of Quaid-e-Azam Zindabad.

Since starting out with TV, the duo made immense contributions to the new wave of Pakistani cinema, starting from Na Maloon Afraad, which came out in 2014. Ever since they’ve been helming entertainers with the top names of the showbiz world.

Upon how Qureshi and Meerza decide the themes or storylines for their films, Qureshi told Fuchsia that he’s never been a trend follower but their films are highly inspired by pop culture and current socio-political issues. “Normally if something bothers people, they put up a social media status about it. We don’t put a status on social media, instead, we make a film about it. With how exciting our country is, every day there’s a new thing to bother us so we definitely take a lot of influence from that,” quipped the filmmaker.

Speaking for Filmwala Pictures, he added, “We like to make films with a purpose. Entertainment, of course, is one of the most important ingredients but when an audience comes to the theatre, we like to make sure that something resonates with them that stays with them enough to have an impact on their lives, no matter how small or big. If 1,000,000 people watch the film and 100 go with an afterthought, that works for us.”

When Qureshi was asked if Meerza always had the sticking-to-current-issues memo established between them when it came to film as a medium, the actor said that at that time, they just wanted to make a film, a good entertaining one. “At that time, there were barely any films. All we ever cared about was to put out one good film and then die. We wanted to have a product that didn’t look indie and could compete with Bollywood and Hollywood films in terms of quality, at least.” Although the Actor in Law maker accepted that Na Maloom Afraad was a tad bit indie but its sound and technical aspects were at par.

Moving on to their latest film, Quaid-e-Azam Zindabad, Qureshi shared that they’re very glad about the feedback they have received so far from the audience- so much so that he’s hoping that the film will do better than his highest grossing film Actor in Law. Recalling one such feedback that won his heart, he added, “A person told me that they showed the film to their children. They told me they recently watched Ms Marvel where they talked about Gandhi and Nehru in the series but there was no mention of Quaid-e-Azam. So, he was really happy that a film was made that talked about Quaid-e-Azam.”

The idea of a mysterious economic crash came to Qureshi over three years ago. “I initially thought of the country waking up to a halt because of an issue with the rupee but we’d always get stuck with it. To develop it further, Fizza thought that the rupee notes have Quaid-e-Azam’s picture and he is watching us from there and when we do something wrong, he gets angry. It sounded so much fun, we made it the opening dialogue of the film!”

Qureshi gives credit to all “corrupt” natives of Pakistan for the idea. Backing up his thought with Shehzad Roy’s lyric from his song Laga Reh, he said, “You know how Shehzad Roy said that ‘shareef wohi hai jisko mauqa nahi mila’ (Only those are innocent who haven’t come across an opportunity yet) it’s the same in our country, everyone is corrupt, everyone’s a thief. It’s not just the police or the politicians. Morally or otherwise, everyone likes to steal things. And that gave me the idea that it’s not one person or class that needs fixing, it’s the whole nation.”

Upon how the duo manages disagreements in the plot when writing or directing a film, Qureshi added that they have a very cordial and respectful relationship. “There are no ego problems between Fizza and me. We present logical arguments to defend our idea and whoever gives a more logical explanation, we go with that person’s idea.”

A rare thing in the industry, Qureshi didn’t shy away from accepting that he does take inspiration from other movies and filmmakers to pay a tribute to them and he did take inspiration from two movies while shooting the Mahira Khan and Fahad Mustafa-starrer. However, he added that certain things are a pain to even remotely recreate given the limited resources.

“I do take inspiration from other movies and there are some cinematic scenes that are iconic and I want to recreate in my films. This is my way of paying homage to them. And yes, for Quaid-e-Azam Zindabad as well I have recreated the opening scenes from Singham and Matrix.”

Heaping praise on his film’s leads, Qureshi shared that he had a blast working with Mahira and Fahad. Calling Fahad a “director’s actor,” Qureshi shared how easy it has always been to work with him given how hardworking he is.

“Fahad and Mahira don’t bring any baggage and negative energy to the set,” shared the filmmaker adding that Mahira was so “brilliant” that he barely had to give her any directions at all.

Apart from the lead cast, Qureshi also gave a shout-out to Javed Sheikh for agreeing to do a small but crucial role in the action-thriller. “I think this is very big of Javed Sheikh that he accepted this role. Some days he didn’t even have any dialogues but I salute him that he did that role and that too, fantastically.”

Speaking about the struggles of shooting the film, Qureshi shared that the journey was full of ups and downs. From Fahad’s leg injury due to action sequences to a ten-minute scene costing them 40 percent of the film’s budget due to a cargo plane model, and a three-day shoot at Frere Hall, the shoot was taxing- financially, physically, and emotionally. However, he added that there were also good parts like the police team helping them train and shoot in the jail for their sequences despite their portrayal in the film.

About introducing new faces in his films, Qureshi exclaimed that he is ever willing to cast and introduce new faces and has done so in the past as well like Kubra Khan and Mohsin Abbas Haider but unfortunately, “new faces come with risks. The audience does not accept new faces most of the time.”

Concluding with a dialogue on Pakistani cinema’s growth in the future, Qureshi highlighted how the industry has taken a massive blow after the pandemic.

He believes that it’s imperative that only filmmakers who are truly passionate about the work continue to produce and work on ideas, otherwise, if films keep floating out for the sake of content and quantity, it’ll become harder to regain the audience’s trust in Pakistani films again.