Will Turkey attack Syria Kurds without nod from Russia and Iran? 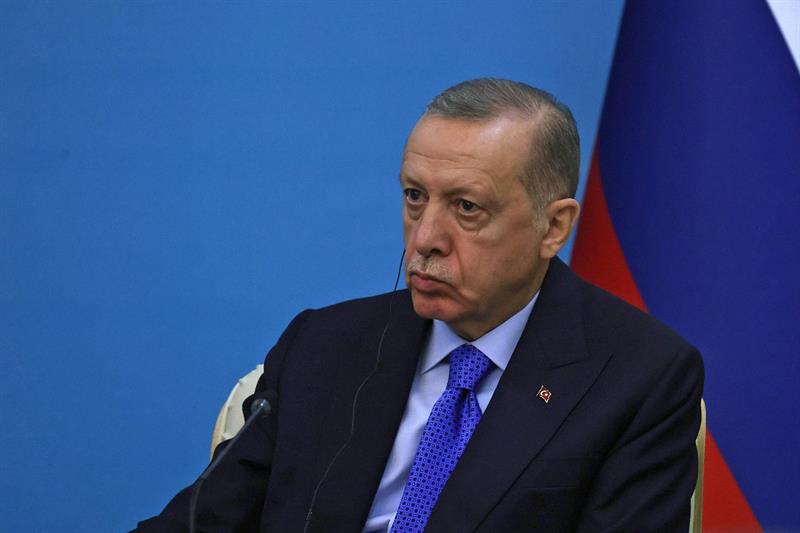 BEIRUT: Turkey has renewed its threats of a new military offensive against Syria’s Kurds, but what can it do after failing to secure the green light of Russia and Iran?

After announcing plans to move against Kurdish forces in the areas of Manbij and Tal Rifaat in northern Syria, President Recep Tayyip Erdogan of Turkey joined a three-way summit in Tehran this week looking for support.

While Iran and Russia, the two other main foreign players in the Syrian conflict, reined him in, analysts say, Turkey insisted Thursday it does not need anyone’s “permission” for a new Syria campaign. Here’s a look at what could be next.

Did Erdogan get the green light?

In Tehran, Erdogan renewed his threats against the Kurdish forces that control swathes of northeastern Syria and are considered “terrorists” by Ankara.

The summit yielded a declaration vowing to cooperate to “eliminate individuals and terrorist groups” in northern Syria and opposing any separatist ambitions. The three main foreign brokers, who have long supported opposing sides in Syria’s war, ostensibly omitted to define who qualified as “terrorist”. Moscow and Washington have repeatedly warned NATO member Turkey against a fresh attack against the Kurds in northern Syria and in Tehran, supreme leader Ayatollah Ali Khamenei warned Erdogan an offensive would be “detrimental”.

“The summit did not give (Erdogan) the green light, but Turkey has repeatedly launched military operations into Syria without a green light,” said Dareen Khalifa, a researcher at the International Crisis Group. But Turkish Foreign Minister Mevlut Cavusoglu said Thursday that Turkey had “never asked and we never seek permission” for its Syria campaigns. “It can happen one night, suddenly,” he said of a new military push, without specifying the scale of such an operation.

Between 2016 and 2019, Ankara launched three military offensives it said were to root out the Kurdish People’s Protection Units, which are the main component of the autonomous Kurds’ de facto army, the Syrian Democratic Forces (SDF). Ankara considers the YPG an extension of the Kurdistan Workers’ Party (PKK), a group that has waged an insurgency in Turkey for decades.

Erdogan has threatened to attack Kurdish-controlled areas of northern Syria that are part of a 30-kilometre (20-mile) deep buffer zone he wants to establish along the border. Bassam Abu Abdullah of the Damascus Centre for Strategic Studies said he thought a Turkish attack was unlikely. “I think that the fuse of the Turkish military operation… has been completely removed,” he told.

What options does Turkey have?

But even without Moscow and Tehran’s stamp of approval, Erdogan could still launch a limited attack. Turkish media reported that any operation would not take place before the end of August or beginning of September.

“One option now that is available to Turkey is to use airpower to strike Kurdish targets throughout Syria. Erdogan has that greenlight,” said Nicholas Heras of the New Lines Institute. Kurdish officials have said they are preparing for a potential Turkish attack. “Erdogan is desperate for permission to violate Syrian airspace to conduct his aggression,” said SDF spokesperson Farhad Shami.

Turkey, which has been carrying out cross-border operations against the PKK in neighbouring Iraq for years, killed nine civilians in artillery fire on Wednesday. An attack on densely populated Manbij would have “grave humanitarian consequences”, Khalifa warned. “Renewed conflict will inevitably lead to mass displacement and suffering,” she said.

Hundreds of thousands of Arabs and Kurds displaced by a 2018 Turkish offensive on the neighbouring Afrin region live in the Tal Rifaat area. Manbij is also an Arab-majority town with displaced Kurds living in and around it.

Damascus ally Moscow “will press hard in this direction,” he said, adding that Ankara “will not be bothered by this at all, they are pushing for the Syrian army to deploy” on the border to avoid a military escalation.

“Any military operation will complicate the situation for everyone,” he said. “The SDF have no choice but to reach an understanding with the Syrian state.” Kurdish forces and the Syrian regime have struggled to reach an accommodation, because the Kurds are reluctant to give up territorial gains while Damascus rejects their self-rule. Khalifa said she is skeptical the two will see eye to eye.

“A Turkish attack would potentially lead to more defence arrangements between the SDF and Damascus but that might not translate into a broader agreement or settlement,” she said. “At least it hasn’t in the past.”