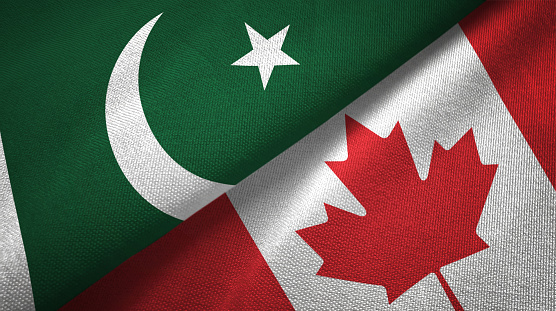 ISLAMABAD: The meeting of the Pakistan-Canada Friendship Group in the Senate with the Canadian House of Commons Member, Sameer Zuberi was held here at the Parliament House on Thursday to explore new avenues for further broadening the bilateral ties between Pakistan and Canada.

The meeting discussed a host of issues, inter alia, including travel advisory of Canada with respect to Pakistan, Islamophobia and high rate of visa refusal to Pakistani students and traders and other matters of mutual interests, said a press release. Deputy Chairman Senate Mirza Muhammad Afridi chaired the meeting. Senators Eng Rukhsana Zuberi, Danesh Kumar, Azam Khan Swati, Rubina Khalid and the Parliamentary delegation of Canada led by Canadian MP and member of the Foreign Affairs Committee of the Canadian Parliament, Sameer Zuberi attended the meeting.

The Pakistani Panel briefed the Friendship Group on the improved security situation in the country and the priority areas of the new government to introduce structural reforms in the key sectors and institution-building. The panel also highlighted FDI-friendly policies available in the automobile, energy, telecom, manufacturing and tourism industry in Pakistan, from which Canadian companies can benefit.

Deputy Chairman Senate, Mirza Muhammad Afridi said that as Canada pursues a path to diversifying its partnerships, Pakistan is one of the emerging economies in Asia offering tremendous opportunities. Pakistan seeks to revive the full spectrum relations in political, trade, investment and development fields with Canada, he added. He also informed the Canadian MP that the existing trade relations between the two countries need to be given a boost and allowing genuine traders to visit Canada to meet with their counterparts can provide the required impetus to trade relations between the two countries.

The Canadian MP, Sameer Zuberi briefed the senators on their endeavours to promote friendship between the parliamentarians of the two countries and remarked that Canada recognizes the economic importance of Pakistan. The meeting also discussed the future roadmap for bringing close together the people of the two countries. Senator Eng Rukhsana Zuberi stressed that bilateral trade between Pakistan and Canada needs to be increased and the private sector should be encouraged in a push to boost trade ties.

Afridi underlined that both countries enjoy exemplary ties but the bilateral trade needs to be increased for which linkages, information, exchange of trade delegations and holding exhibitions are of vital importance. He also extended an invitation to the Canadian Parliamentary group to visit Pakistan and urged the Canadian business community to form linkages with the chambers of Pakistan.

Senator Azam Swati commended the leadership of Canada for upholding and setting standards of Human rights. He also urged Sameer Zuberi to present a soft image of Pakistan in Canada. He remarked that Islam means spreading love and peace and called for countering anti-Islam propaganda.

Senator Danesh Kumar stressed promoting inter-faith harmony. He also mentioned and thanked the Canadian Barrick Gold company for investing in Reko Dik, Chaghi district. He invited the Canadian MP to visit Balochistan along with other MPs.

Senator Rubina Khalid underlined the importance of learning from each others parliamentary practices. She appreciated the initiatives taken by the Prime Minister of Canada for promoting inter-faith harmony and countering the threat of Islamophobia. She called for avoiding political polarization and promoting inter-societal harmony. She emphasized adopting the practice of providing support staff to the parliamentarians on equal footing.

Deputy Chairman Senate enlightened the visiting dignitary regarding the working of the upper house of the parliament on the bills related to human rights as per the requirement of the FATF. He also invited the Canadian Member Parliament to join International Parliamentarians Congress, an initiative of H.E Senator Muhammad Sadiq Sanjrani, Chairman, Senate of Pakistan.

Senator Swati also raised the issue of the high rate of rejection of student and traders visas. To which Sameer assured that he will convey the reservations regarding visa rejection and work for its perseverance.