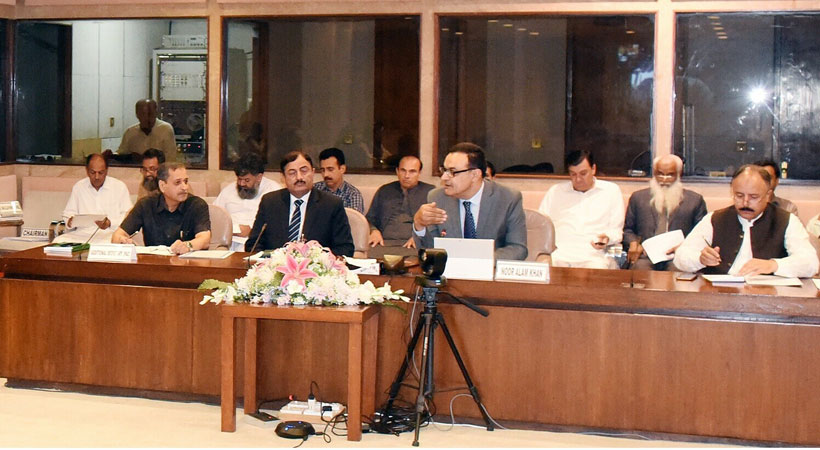 The Public Accounts Committee (PAC) has sent a final notice to NAB’s acting chairman and Lahore DG to appear personally before the committee on Wednesday (today) over the issue of NAB officials’ assets or face punitive action.

The committee warned both officials of the National Accountability Bureau (NAB) that it would resort to using police power to bring them before the PAC and would also initiate action against them under Article 201 of the Constitution if they fail to appear by 1pm.

The meeting of the PAC, with Noor Alam Khan in the chair, was held on Tuesday at the Parliament House in Islamabad. The committee chairman expressed extreme displeasure over PAC’s mandate getting challenged before the High Court by the officials of the accountability watchdog.

Alam said they would defend PAC’s powers – enshrined in the Constitution – in the court while questioning what was wrong in the panel’s efforts for enhanced transparency. “I want to ask the Supreme Court and courts of Punjab, Sindh, Balochistan, and KP whether I should not stop corruption?” the chairman said and added, “I am hopeful that the courts also want to eradicate corruption.” The committee examined suggestions of invoking Article 6 of the Constitution against officials not rendering the required documents to the PAC, which has repeatedly asked them to declare their assets. However, the committee member Senator Mushahid Hussain Syed opposed this suggestion saying that Article 6 was reserved for individuals abrogating the Constitution.

At this, Alam remarked that corrupt NAB officials abuse their powers to pressurize women and develop illicit relations with them. He asked why action should not be taken against them.

Later talking to media, Alam reiterated that PAC could seek records from any civil department as per its constitutional powers. He claimed that officials of all institutions except NAB regularly disclose their assets. The committee chairman said NAB was not a military but a civilian institution and added that its officials were required to disclose the assets they had accumulated to date since joining the bureau. Alam said that he used to respect ex-NAB chairman Justice (r) Javed Iqbal till his objectionable videos surfaced. He also warned of issuing a warrant against him over the latter’s failure to appear before the PAC. He said that NAB officials should resign and sit at home if they don’t accept PAC.

Alam praised Prime Minister Shehbaz Sharif’s instructions regarding a live telecast of PAC’s proceedings and said that he would soon meet National Assembly (NA) speaker to implement the decision at the earliest. Meanwhile, NAB Acting Chairman Zahir Shah on Tuesday moved Islamabad High Court (IHC) against the PAC, stating that the committee’s summon notice was beyond its jurisdiction. The petitioner Shah made NA secretary parliamentary affairs secretary, PAC chairman, and others respondents in the plea.

Earlier, NAB Lahore DG Shahzad Saleem had challenged the summon notice served on him by the PAC in the Tayabba Gul harassment case before the Islamabad High Court (IHC). The IHC registrar fixed the acting chairman’s petition for hearing on Wednesday (today), despite objections. A single-member IHC bench headed by acting IHC Chief Justice Aamer Farooq will preside over the case.

Meanwhile, Tayabba Gul – who was at the center of a video controversy involving ex-NAB chief Justice (retd) Javed Iqbal – has sought permission to become a respondent in the petition filed by NAB Lahore DG against the summon notice of the anti-graft watchdog in an inquiry on harassment charges.

The high court will also preside over this case today.