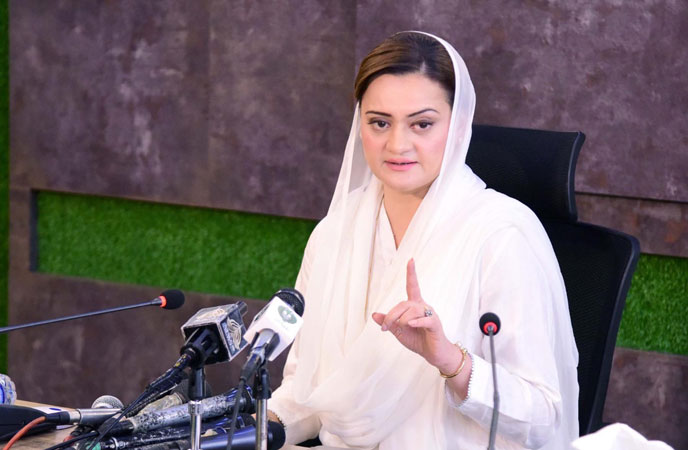 Addressing a news conference, she said Imran Khan had laundered billions of dollars by receiving foreign funding in bank accounts of Pakistan Tehreek-e-Insaf’s (PTI) office-bearers, which had caused a huge loss to the national exchequer.

“Imran Khan tried to reach out the incumbent CEC through back door channels as he wanted him to play a role like that of the ex-NAB chairman, but Sikandar Sultan Raja will not become another Javed Iqbal at any cost,” she maintained.

The minister said Tayyaba Gul was held hostage at the Prime Minister’s House to blackmail the former NAB chairman for victimizing the political opponents by filing false cases. The former Federal Investigation Agency director general was also pressurized to register cases against the then opposition leaders.

Imran Khan, she said, was attacking the Election Commission of Pakistan (ECP) as it had reserved the decision in the PTI’s foreign funding case, which it could announce any time.

She claimed that the PTI chief had a mindset of despotic German dictator Hitler. It was beyond understanding that he (Imran Khan) had launched a scathing attack against the same CEC, who was appointed by him.

“He (Imran) will take no time to attack the Supreme Court, if it gives a decision against him,” she said.

Talking to the media earlier in the day, PTI leader Fawad Chaudhry had said that his party was “ready for dialogue” with the government over electoral reforms but reiterated their demand for the CEC’s resignation. “Our agenda is clear. The CEC should resign and a new trustable ECP should be constituted by all political parties. Once that is done, Shehbaz Sharif should announce the date for fresh elections.” Only then, will we be ready to talk to the government, he said. He went on to say that the government had very little time remaining in power. “We can oust them today if we want to. But we want them to take the decision. The ball is in their court.

Fawad was also confident that the PTI would assume power in Punjab by July 22 when the run off election for the province’s chief executive takes place. “And once that happens, we might impose a ban on the entry of Rana Sanaullah in the province,” he revealed.