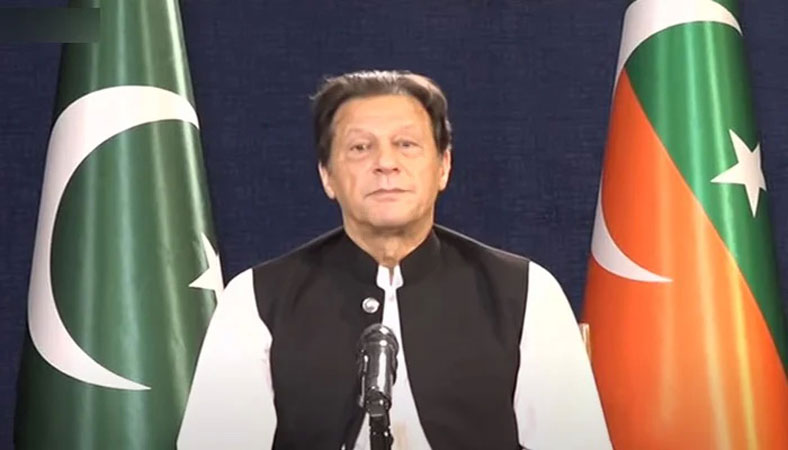 A day after trouncing the PML-N in the Punjab by-elections, PTI Chairman Imran Khan Monday insisted that early elections were still the only solution to the country’s woes and demanded that the Chief Election Commissioner (CEC) Sikander Sultan Raja should step down paving way for free and fair elections.

In an address to the people, Imran thanked youngsters and women for coming out in large numbers to vote for the PTI. “I believe this is the moment in the history of Pakistan that we should be thankful for because the nation has awakened,” Imran remarked. “People have finally understood the ideology of Pakistan.”

The ex-premier, however, stressed that Pakistan was facing an economic crisis that was fueled by the political mess. “Our reserves have shrunk by half since PML-N came to power. Despite the agreement with IMF (International Monetary Fund) in sight, our rupee is declining.”

He highlighted that amid these crises, the only way out was free and fair elections. But, Imran contended, those elections should not be conducted the way by-elections in Punjab were held. “[During the by-polls] they used all the tactics to defeat us. Police threatened our people. Officers acted as workers of PML-N,” he claimed, adding that Punjab Chief Minister Hamza Shehbaz had no authority to use the police like that. He also highlighted that there were four million deceased voters included in the electoral rolls.

Separately, Imran claimed that the CEC tried his best to turn the polls in favour of the PML-N. “I am disappointed in the chief election commissioner. How could he let all this happen? He is not competent to run the Election Commission of Pakistan and is biased towards a political party. Raja should immediately resign.”

He said his party did not trust the CEC, citing the example of Senate elections in 2021 in which Imran said evidence of bribery was seen. “He (Raja) is taking money from two sources – the Sindh government and the Election Commission. His case is pending with the Supreme Court,” Khan said.

“Even the Election Commission tried all tactics to ensure we lose. But we won despite that as people came out to cast their votes like never before.”

The PTI chairman said that transparent elections are not possible under the current election commissioner. “In Sindh’s LG (local government) elections, 15 per cent of PPP candidates won unopposed, nobody investigated it,” he recalled. “During the Daska polls, the returning officer opened all the votes against PTI. He made us lose that election.” He said that despite several cases of rigging during polls being brought before the CEC, he never punished anyone, which encouraged malpractice as no one feared accountability. But, despite all these tactics, Imran said: “We won as people came out to cast their votes like never before.

At the outset of his speech, the PTI leader said he was elated today because the nation had finally started questioning slavery. “We have rejected slavery and we will now become a nation with the grace of God.” Referring to the incumbent government, he said that all the leaders had their money stashed abroad. “They say they are ready to die for Pakistan but spend vacations overseas,” he highlighted.

But, he continued, the way women and youngsters came out last night, they had proven that “we are finally in the Naya Pakistan”. Imran recalled that during his tenure an “artificial political crisis” was created.

“The government was running smoothly and there’s proof of it in the economic survey. It said that after 17 years, our growth rate increased and all the indicators showed we were progressing.” He said in the PML-N’s previous tenure of five years, Pakistan did not see a rise in exports. “They left huge fiscal deficits in both their terms. They came to power only to get cases against them quashed. They got bills passed from the assembly. “But God willing, I will challenge all this in the Supreme Court tomorrow (Tuesday),” the former PM vowed.

Imran added that problems could only be resolved if there was political stability. “We have a strong asset sitting abroad. I promise you that overseas Pakistan will invest as soon as we ensure stability in our country.” “A group of people become a nation when they have a vision,” he reiterated, saying that he was happy because people started questioning [the rulers] and were determined that they would not accept slavery after an “imported government” was imposed on all of us through a “foreign conspiracy”.”I am happy because, for the first time, I am seeing awareness among people and now – by the grace of Allah – we are heading toward becoming a nation which will resolve all issues, including debt and lack of resources, among others,” Khan said while highlighting that the elite in the country had invested abroad and owned properties in foreign countries because they have no trust on Pakistan.

Recalling the sacrifices rendered by ancestors in the independence of the country, the PTI chairman said that everybody should be proud of the people of Punjab, especially women, who came out to cast their votes, “this is Naya Pakistan.” Imran said that when PTI was in power an “artificial political crisis was created”. “If you look at the Economic Survey for the fiscal year 2021-22 you would see that after 17 years, Pakistan witnessed record growth in the last two years of the PTI government,” he highlighted, adding that all indicators were showing an uptrend, particularly large-scale manufacturing which provides employment opportunities and increases tax collection, etc. He said during the five-year government of PML-N, Pakistan did not see a rise in exports. “They left huge fiscal deficits during both their terms. They came to power only to get cases against them quashed. They got bills passed from the assembly,” he said referring to the NAB amendment bills.

“But god willing, I will challenge all this in the Supreme Court tomorrow (Tuesday),” the PTI leader vowed. Shedding light on the current economic situation in the country, he said it was an outcome of the political crisis. “Our reserves have shrunk by half since PML-N came to power. Despite the agreement with International Monetary Fund (IMF) in sight, our rupee is declining,” he said, taunting that now they [coalition government] blame international crisis for tough decisions. He highlighted that amid the crises, the only way out was free and fair elections.

In the coming days, Khan said that if the relevant quarters do not understand that political instability had a drastic impact on the economy, then he feared that things will go out of hand. “Economy is linked to political stability […] and the only way forward is transparent elections,” the PTI chairman said. The PTI chairman said that during his political career, which spans more than two decades, he has never seen such “awareness” among the Pakistani nation as it was witnessed during the by-elections. Khan said that he will never forget May 25 – the day his party marched to Islamabad – as the government “tortured” PTI workers and supporters. “They did not feel ashamed while tear gassing our supporters despite the presence of families there […] they have no empathy for people,” he said. The PTI chairman said that despite all efforts of the government, the public took to the streets and, resultantly, Pakistan was “finally heading towards becoming a nation”. “If someone thinks that the nation’s decisions can be made behind closed doors, then they’re wrong.” Khan said that if anyone plans of stealing people’s mandate, their plans will fail, adding that the only way forward for the country was early elections.