PML-N decides not to dissolve NA, for now 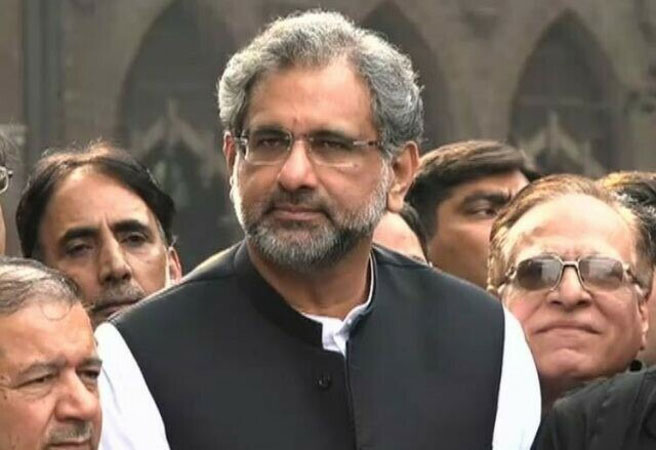 Former prime minister Shahid Khaqan Abbasi Monday said that the incumbent coalition government will not opt for early elections anytime soon and instead complete their term till August 17, 2023.

Speaking to media, the Pakistan Muslim League Nawaz (PML-N) leader said the government and its allies are confident of continuing to rule till their term ends. “The government’s performance is judged during by-elections,” he said. “After the vote of no confidence, we had to decide whether to form a government or not and all the coalition partners decided to do so.”

Abbasi maintained that PML-N sacrificed their politics just to take tough economic decisions for the welfare of the country. “If Imran Khan’s government had stayed then we would’ve defaulted by now,” the ex-PM said. “Imran could not have saved the economy.”

He further said if the establishment could have stolen the 2018 elections then who could stop them during the by-elections. “There were no hopes that Imran Khan could have taken the country on the right path. If we had defaulted then we would have turned into a Sri Lanka.”

Meanwhile, Minister for Information and Broadcasting Marriyum Aurnagzeb on Monday said Prime Minister Shehbaz Sharif had invited leaders of Pakistan Democratic Movement (PDM) and other government’s allied parties to his residence in Lahore on Tuesday noon for an important meeting. The meeting at the 96-H Model Town would review the overall situation in the country, the minister said in a news statement. During the meeting, the government’s coalition partners and PDM leaders would hold consultation on important matters.

Earlier a party report submitted at a high-level huddle on Monday claimed that the decision to award tickets to PTI defectors, high inflation due to record increase in the prices of fuel and electricity among other reasons resulted in the thumping defeat to the ruling Pakistan Muslim League Nawaz (PML-N) in Sunday’s Punjab by-elections.

The detailed report on by-polls defeat was presented to the high command of PML-N in a meeting chaired by Prime Minister Shehbaz Sharif in Islamabad on Monday, a private TV channel reported.

The party insiders said Interior Minister Rana Sanaullah presented the detailed analytical report of each constituency where the party lost the elections. As per the report, the PML-N workers and supporters rejected the ‘turncoats,’ who defected from the PTI. The party officials, workers and former local body representatives did not run the robust election campaign, said the report. Moreover, the report added that PML-N-led government’s tough economic decisions to secure the IMF bailout package played a major role in the defeat.