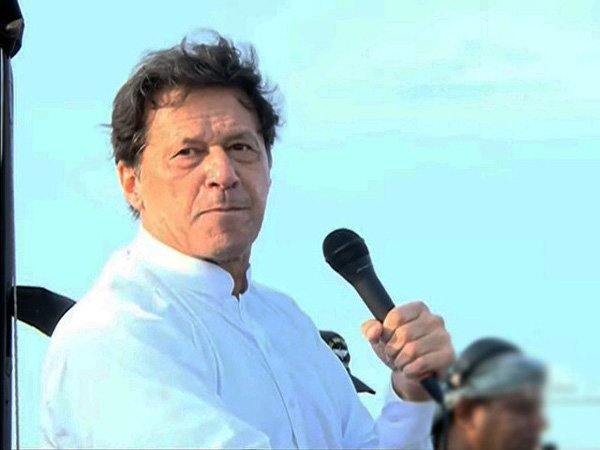 Former prime minister and PTI Chairman Imran Khan Friday said he will fight the ‘thieves’ till the last ball.

“I will never let them get away with your Rs1,100 billion,” he said while addressing a rally in Faisalabad in connection with July 17 by-polls in 20 constituencies of the Punjab Assembly. Imran said the nation will never forget those who imposed ‘criminals’ upon the country through a foreign conspiracy.

“You are my team and I am your captain and this captain knows how to compete.” He claimed that Sharifs and Zardaris never did anything with honesty, alleging that his party’s opponents cannot win without massive rigging.

The PTI chairman said after 9/11, our ruler of that time got a call from the US and we entered a foreign war. “Pakistan sacrificed a lot for the US war. We lost 80,000 Pakistanis and even today our soldiers are giving sacrifices because of that war. When democracy was restored, people thought it will talk about the people but the US conducted 400 drone attacks during Nawaz Sharif and Asif Ali Zardari’s tenures.” Imran said that he does not want enmity with anyone but he will also never be a slave to anyone, says a news report.

“US doesn’t like leaders who take a stand it likes cherry blossom leaders like Shehbaz Sharif.” For the last 32 years, the former PM said, PML-N and PPP were ruling Pakistan. “Whenever they come [to power] they beg. They are shameless people. If they had any honour, they would’ve returned the money they had looted from this country rather than begging,” he added. Urging people to vote, he hoped that PTI will win in all 20 constituencies and will give “lotas a beating”.

“You all have to come out and protect all polling stations because opponents cannot win without rigging,” he added. Noting that the government will not be able to brought down the prices of petrol and diesel further, he said that PM Shehbaz first raised the price of diesel by Rs130 and then brought it down by Rs40 per litre. “Price of petrol should have been reduced to Rs150 and diesel to Rs144 but they are following orders of IMF only. IMF also pushed us to raise prices but we did not,” he added. Imran said that Nawaz Sharif’s entire family lives abroad but only “Radio Akhashwani” is in Pakistan, referring to PML-N Vice President Maryam Nawaz. “Maryam owns four expensive apartments in London. Our justice system can only catch small criminals but not big ones.”

Talking about Sri Lanka, he said that like Pakistan, it too was being ruled by a single family which became rich while the country got poorer and subsequently, it defaulted. Talking about the achievements of his government, the former premier said that the PTI government saw record exports. “We had record textile exports. There was a shortage of labourers in Faisalabad as a result. We gave health cards in Punjab for the first time in the history of Pakistan. Ehsaas Programme was taking the country towards a welfare state. We gave interest-free loans to people,” he further said.

Imran said he had never seen his nation as aware in the last 75 years as he grew up with the country. He said that the cabals of crooks – imposed through US-backed conspiracy – plundered Rs1,100 billion of public money through amendments in NAB laws as they came into power. He also vowed to defeat Punjab Chief Minister Hamza Shahbaz despite the fact that the ‘umpires’ stood behind him.

Imran Khan said the textile industry of Faisalabad was booming only a few months earlier so much so that it created a shortage of laborers. However, he lamented that industries were shutting down now due to the government which came into power through conspiracy. Imran Khan on Friday offered the government to try him under Article 6 of the Constitution – pertaining to treason – as it would provide him the chance to tell everything about the ‘foreign conspiracy’ resulting in his ouster from power. “Impose Article 6 on me, I know how they [rulers] were imposed.” Commenting on the recent judgment of the Supreme Court against ruling of NA deputy speaker, the former premier said the courts got opened at midnight and a suo moto notice was taken. “When I saw this game being played, I said the best thing would be the elections where people would elect whoever they want.”

He said a judge of the top court has suggested his trial along with others including President Arif Alvi under Article 6. “Today I say it before everyone .. impose Article 6 on me. At least this way, I would be able to tell what I have not spoken yet.” “An elected government was removed and thieves were imposed on us [Pakistan].” He said the Supreme Court established that there was no conspiracy but questioned how it could say this without any probe. PTI chairman said the apex court has not probed the threatening letter yet despite President Arif Alvi sent a letter to the chief justice of Pakistan regarding it.