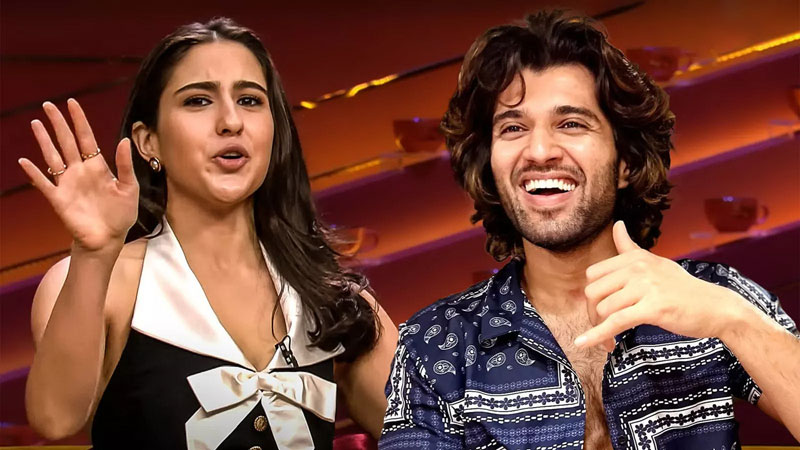 In the teaser of Koffee with Karan Season 7 released earlier on Thursday, we saw Sara Ali Khan reluctantly revealing her crush on Telugu star Vijay Deverakonda.

Sara, who will be seen with Janhvi Kapoor on the couch, was asked by host Karan Johar to name a guy she would like to date from the film industry.

Deverakonda on Tuesday responded to the promo of Koffee with Karan. He took to his Instagram story and wrote a sweet note for Sara which reads, “I love how you say, Deverakonda. Cutest. Sending big hugs and my affection.”

In her previous appearance with father, actor Saif Ali Khan, Sara Ali Khan had gone on to reveal her crush at the time on Kartik Aaryan, and they reportedly even dated briefly before going their separate ways. But this time when Karan Johar said, “Sara, give me a name of a boy you feel like you want to date today,” a hesitant Sara is heard saying, “No no, no,” at first, and then after a pause, mentions Vijay Deverakonda’s name which elicits laughter from Janhvi Kapoor.

Later, KJo mentions that Janhvi is currently spotted with Vijay Deverakonda, which prompts Sara to turn to Janhvi and ask, “Do you like Vijay?” Clearly, just like the previous episode featuring Ranveer Singh and Alia Bhatt, the second episode of the chat show also promises to be a blast.

On the work front, Vijay Deverakonda will soon be making his Bollywood debut with Liger, where he will be seen romancing Ananya Panday. Koffee with Karan Season 7 streams on Disney Plus Hotstar.