‘Violators’ of constitution must be tried for treason 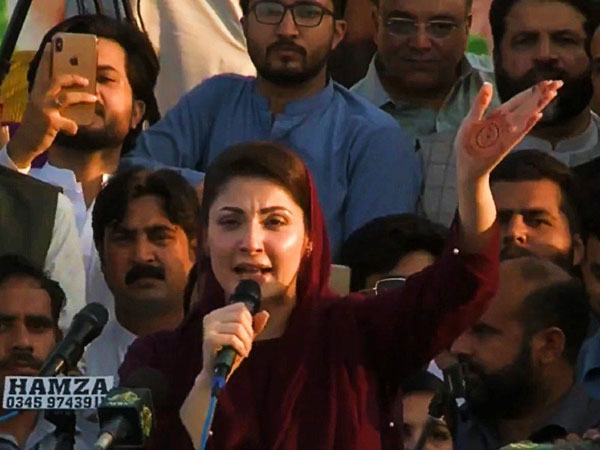 Addressing a public meeting in Kallar Syedan area of Rawalpindi, she said the decision had effectively finished Imran Khan’s politics, adding that those who breached the constitution of Pakistan must be tried under Article 6 of the Constitution and be given an exemplary punishment. She said the apex court also finished the PTI chief’s narrative of ‘foreign conspiracy’.

“The Supreme Court judge said he [Imran Khan] never gave proof of conspiracy. If he had any proof, he would have presented as there is no better forum than the Supreme Court to validate his claim,” she added.

“Now he [Imran] is crying about rigging. The person who lost all by-polls to the PML-N during his own tenure is saying that there is rigging. Imran Khan is the founder of rigging in Pakistan.” Maryam, quoting Imran Khan’s address, said he saw a picture of Nawaz Sharif on a motorway.

“How would you not see that picture [of Nawaz Sharif]. He resides in people’s hearts. You will see his pictures in every home.”

Taunting the former premier, she said Nawaz Sharif had built motorways Imran Khan was using to arrive for his public gatherings, adding that the former premier was an “enemy” of the people of Punjab and Pakistan, says a news report. “You must throw him outside the borders of Punjab [via by-polls],” she urged the participants.

The PML-N stalwart said Imran Khan had laid landmines for the incoming government which caused the leadership to take tough decisions but added that the coming days will bring good news.

“Today, Prime Minister Shehbaz Sharif will address the nation and reduce the prices of diesel and petrol,” she added.

Lashing out at Imran Khan, Maryam said he keeps asking to reduce petrol prices. “What do you have to do with it? You kept increasing oil prices for four years. Taking care of the masses is our responsibility now,” she added. She further said those who used to say they didn’t come to power to look after the prices of potato were now telling the prices of different commodities in their addresses.

She said Imran Khan should not worry about the prices of commodities as inflation was a result of the landmines he had laid. Speaking about the rigging rhetoric of Imran Khan, Maryam Nawaz responded that placing a ban on the airing of speeches of PML-N supremo Nawaz Sharif was the real rigging. “The real rigging is putting the daughter in jail with the father,” she said. The PML-N leader said despite being on the “same page”, Imran Khan lost all by-elections against PML-N during his tenure.