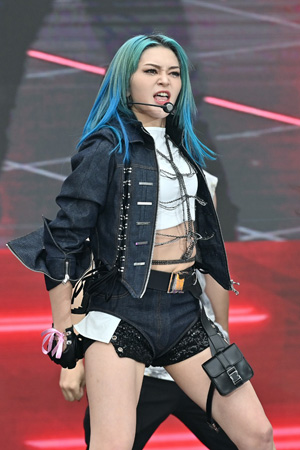 From Indian K-pop idols to Swedish songwriters, South Korea’s music industry is now a hotbed of global talent – a smart strategy as it aims for world domination, experts say.

K-pop bands have long included non-Koreans: Blackpink’s Lisa is Thai, while Japan and China are both well represented and Korean-American singers have topped the local charts. But after megastars like Psy and BTS brought K-pop to a global audience, the South Korean entertainment agencies behind almost all the popular groups are recruiting further afield.

DR Music’s girl group Blackswan only has two Koreans in its six-woman line-up, and last month added the industry’s first Indian “idol”, who joins Brazilian and Senegalese members. In the United States a Korean-American K-pop singer, AleXa, recently won NBC’s American Song Contest, the US version of Eurovision. Though she sang in English, her training in Seoul made her stand out. Staff at NBC said they had “never worked with an artist who could find a camera on stage faster”, according to Angelina Foss, creative director at South Korea’s ZB Label.

By the end of filming, other contestants were asking AleXa for tips, Foss said, adding that it was “just part of the training”.

‘NEXT STEP’ — with comprehensive training programmes covering everything from acting and etiquette to stunt coordination, K-pop artists make some Western pop stars look like they are not even trying. Recruited in open castings or found through online audition tapes, South Korea’s entertainment agencies identify the raw talent and then get to work. At ZB Label, part of industry powerhouse Zanybros which has produced thousands of K-pop music videos, the bosses are “always thinking – what’s the next step in K-pop”, Foss said. They signed AleXa because they believe she has the “full package” and saw her potential as a young Korean-American to appeal to K-pop’s growing global fandom. AleXa has studied dance since she was two but said the training regime was still gruelling. “I trained every day of the week. I had dance classes every single day,” said AleXa, who also did years of competitive cheerleading while growing up in Tulsa, Oklahoma. “I had weekly evaluations, which is a very big thing in the K-pop industry,” she said, explaining that trainees perform for company staff to assess their progress. After “months and months and months” of work, her bosses decided she was ready to “debut” as a fully-fledged star. In K-pop machinery the concept of an artist’s debut is very important and obsessive detail is put into styling, staging and cinematography. “Concept and execution are very, very critical,” said AleXa, whose songs are written in Sweden but produced in Seoul with a US audience but global YouTube views in mind.

‘STRIVE FOR PERFECTION’ — K-pop recruiters are fanning out across the world, with BTS’s agency Hybe hosting auditions in cities including London, Bangkok, Sydney and Tokyo, but at the same time global talent is flocking to South Korea. Iyanu Anderson, 24, discovered K-pop as a teenager in Britain where she studied Korean at university before moving to Seoul, now working as a dancer, actress and model. “I’d love to be trained,” said Anderson, who has appeared in a Samsung commercial with BTS and performed as a backing dancer at their three March concerts in Seoul. “But to debut as an artist, I’m not sure,” she told AFP, citing the huge pressure, scrutiny and workload facing K-pop idols. Even as a backup dancer “there is a certain amount of pressure, just because when we’re shooting a commercial, they strive for perfection”. “Sometimes we’re shooting for hours and hours and one thing is out of line. And then it’s a whole new setup,” she said. It is “quite difficult” for overseas performers to adapt to the hard-driving K-pop system, said Michelle Cho, assistant professor at the University of Toronto. But the industry itself is being forced to adapt to draw top talent from across the globe, she added. K-pop managers are “paying attention to pop cultural or youth cultural aesthetics and styles… in lots of different places”, Cho explained. If they manage to successfully diversify casting and train new types of stars, “that can only be a good thing” for the industry and its global prospects, she said.