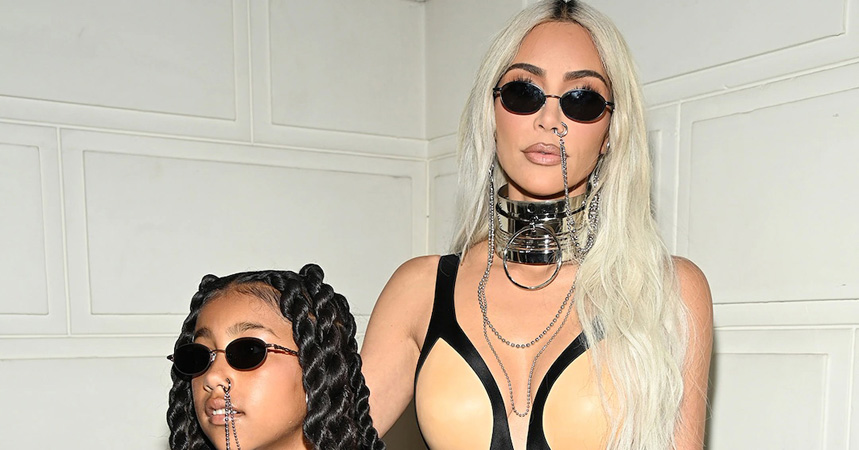 Like mother, like daughter. Kim Kardashian’s mini-me North West turned heads at Paris Fashion Week, stepping out in an edgy pinstriped outfit made from the same material as her mom’s dress at the Jean-Paul Gaultier runway show on July 6.

While the 9-year-old looked like she meant business in a white blouse and black tie tucked under her patterned vest and skirt, her mom opted for a more glam look in a long gown that featured a beige-colored bustier.

Though the pair rocked dynamically opposing shoes? (chunky platform boots for North and sleek pointed heels for Kim?), they completed their ensembles with matching silver nose rings that were attached to chains around their necks, as well as similar circular sunglasses.

And as if her unique style hasn’t already cemented her as a rising It Girl, North—who Kim shares with ex Kanye West along with Saint, 6, Chicago, 4, and Psalm, 3—was seen rubbing elbows with fashion royalty at the event. Not only was she seated next to Anna Wintour at the front row, but she was also seen chatting it up backstage with designer Olivier Rousteing and grandma Kris Jenner.

Kim and North’s mother-daughter outing comes just a day after they served up some looks while visiting the Balenciaga store and Jean-Paul Gaultier headquarters in Paris. For the occasion, North gave a sweet nod to her dad by donning a varsity jacket from the Donda rapper’s former streetwear label, Pastelle, that he rocked at the 2008 American Music Awards.