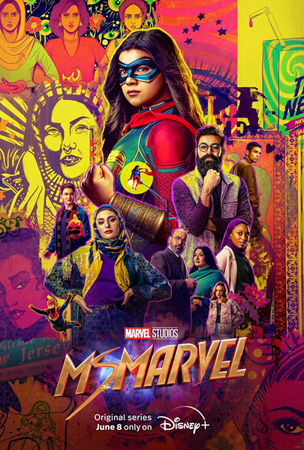 Pakistan’s leading film and TV actor, our very own diva Mehwish Hayat has bagged herself a feature on the ‘Disney+’ homepage.

Hayat, who plays Aisha in MCUs mini-series, ‘Ms Marvel’ – the great grandmother of protagonist Kamala Khan essayed by Iman Vellani – was on the homepage earlier this week with the release of episode 5.

The ‘Punjab Nahi Jaungi’ actor took to her Twitter handle to share the feat and acknowledge her fans for the love sent her way. “Wow! Aisha on the Disney+ homepage!” she wrote on the micro-blogging site along with a screengrab of the page.

“Overwhelmed with all the love frm around the globe. Getting emotional the way she’s touched so many peoples’ hearts,” she penned further.

Additionally, the actor also mentioned her newly improved vocabulary with words like ‘simping’ and ‘face card’ in the tweet.

It is pertinent to mention that Hayat owned episode 3 with her first glimpse as Aisha earlier, where she was seen sharing screen space with Pakistan’s super-versatile and one of the finest actors, Nimra Bucha – who plays Najma in the series.

Moreover, in the latest episode 5 of ‘Ms Marvel’, Hayat amazed audiences with her equally praise-worthy performance with Pakistan’s heartthrob Fawad Khan who plays Hasan – husband of Aisha and great grandfather of Khan.

On the work front, Mehwish Hayat is certainly on a roll at the time with a series of amazing projects in her kitty.

She will be next seen in Nadeem Baig directorial ‘London Nahi Jaunga’ set to hit theatres on Eid-ul-Adha.