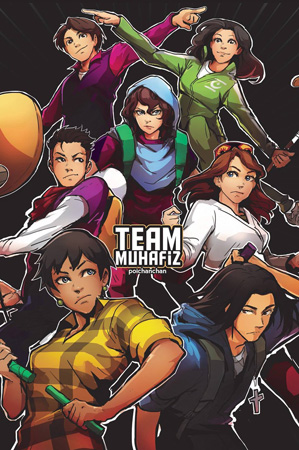 The last episode ended with Rawka – the antagonist we love to hate – giving a thrashing to the leader of his gang of hoodlums for getting their behinds beaten black and blue by Team Muhafiz.

The second episode starts with a guy buying drugs outside a boys’ college in Karachi. The opening scene sets the tone for what’s about to come for the rest of the episode, aptly titled “Zehar” (poison). The episode starts off with Reza bumping into a guy who purchases drugs from a man who keeps up the appearance of a beggar. Confused, Reza doesn’t make much of the encounter as he heads back to Team Muhafiz’s headquarters.

Later that evening, Reza and Zane see the same guy with another man smoking pot in a back alley. Our heroes intervene, jumping out of the sky to give them a pep talk.

While Reza reasons with the kids getting high, Zain is a bit forceful and lives up to his “hot-headed” character.

Back at the headquarters, the team has a new headache to deal with; drug barons and their products. We are introduced to two more members of the team, Badshah Khan and Aarya.

Badshah Khan made an appearance in the last episode when he gave Parinaaz critical information about Zoltar. We don’t find out much about his past or how he came to be a part of the team apart from his code name, “Baseer” and that he hails from Swat and is a computer genius.

We are then introduced to Aarya, aka “Toofan” who hails from Umerkot in Sindh. We’re told Aarya and her family’s lives were turned upside down when Umerkot’s notorious land grabbers occupied their land and forced them out on the streets. The unfortunate incident turned out to be a blessing in disguise as Aarya directed her anger at the various evils that plague society and joined Team Muhafiz.

After commendable intelligence work, our heroes arrive at a hotspot for the city’s drugs. Reza has a stroke of genius and manages to get the team through the well-guarded facility. We won’t spoil the episode for you by detailing the action that later takes place. All we can say is, that the bad guys had it coming.

Team Muhafiz may have won round two against Rawka, but it seems our super villain has had it with the crime-fighting teenagers throwing a spanner in his evil works.

The episode ends with a cliffhanger, as a sniper cleverly placed by Rawka fires a shot at Parinaaz. Will Parinaaz survive or will Reza and his magic bow save Parinaaz once again? We’re afraid audience members on the edge of their seats have no other choice but to tune in next Saturday to find out.