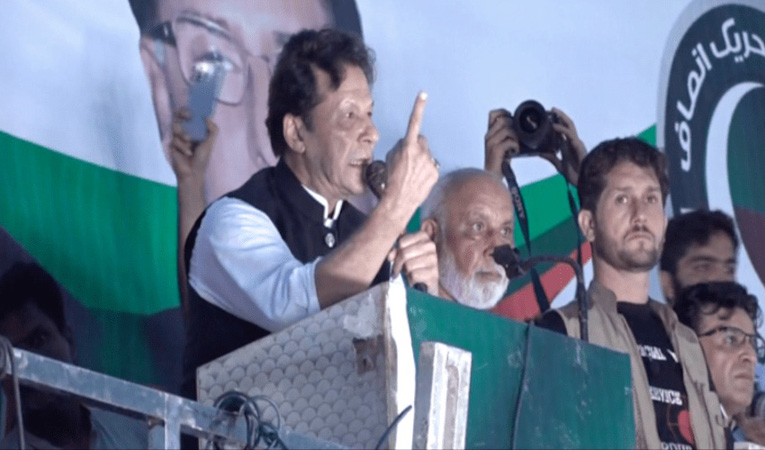 Former prime minister Imran Khan has expressed optimism that the Pakistan Tehreek-e-Insaf (PTI) will win all 20 seats in the upcoming by-elections on July 17, defeating all opponents in Punjab constituencies despite the unity government getting the ‘support’ of the Election Commission of Pakistan (ECP).

Addressing a public gathering in Sahiwal, the former prime minister challenged that no matter what the Sharifs do [in order to] attract voters for by-polls to be held in 20 constituencies on July 17, the “PTI will win.” He said that the people have very well-understood the lotas (turncoats) and “diesel” (referring to JUI-F chief Maulana Fazlur Rehman). Khan urged the youth to make sure at least 10 youngsters are present at each polling station in order to stop them [PML-N] from rigging the elections.

Accusing the Election Commission of Pakistan (ECP) of being involved in “ill practices”, Khan said: “The ECP is working along with them [PML-N] to help those thieves win.” “I challenge the ‘imported’ government… Whatever you do on July 17 we will win all 20 seats in the by-elections,” he said.

He said that the “imported” government had become so unpopular that even if they get the support of the “umpires”, they will not be able to win. He said that Nawaz Sharif, Shehbaz Sharif, Asif Ali Zardari, and Maulana Fazlur Rehman have been taking their turns in the government for the last 30 years but despite all their experience they have broken all records of inflation and made a mess of the economy. “When we criticise them they lodge FIRs against us. They have registered 15 FIRs against me but I tell you even if you register 1,500 FIRs, I will not let you go,” he vowed.

Blaming the Election Commission of Pakistan for doing everything in their power to make the coalition government candidates win, Imran Khan said that voter list tampering is in full swing for the Punjab by-elections on July 17. He said Punjab Chief Minister Hamza Shahbaz is in touch with a man in Lahore who was assigned the job of rigging the upcoming by-polls.

He declared that the nation will hear good news on the day of Punjab by-elections that PTI has won all the 20 seats. Imran hailed the courage of journalists such as Ayaz Amir and Imran Riaz Khan for speaking the truth. “Those who are trying to suppress the truth think that they will instill fear in the public so that the people stayed quiet but they are absolutely wrong.”

The ex-premier disclosed that he is being advised from certain quarters that if he does not fall in line then he will be thrown in jail. “The public and history won’t forgive the people who are calling the shots.” He warned if peaceful protests won’t be allowed to be carried out then the country will be pushed towards anarchy. “The situation of Sri Lanka and Lebanon will be replicated back here,” Imran said. “People will get out on the streets.”

The former prime minister cautioned the government to not scare people with FIRs because it won’t deter them from their struggle as they are ready to wage jihad and fight against injustice. The PTI chairman further said ex-pm Nawaz Sharif and ex-president Asif Ali Zardari worship money. He also said that Zardari is the biggest beemari (illness) of the country for the past 30 years, adding that Nawaz was plundering resources of the country despite being in London. “Maryam Nawaz cannot say a single word of truth but she’s getting a protocol. The journalists who sell their conscious are looking for the highest bidder,” he added.

Calling the current rulers “thieves”, the ousted PM said that even those who are standing with them will not be forgiven by the nation. “If you stop the protests then there will be anarchy in the country. The nation does not fear FIRs now. The situation has passed that point.”