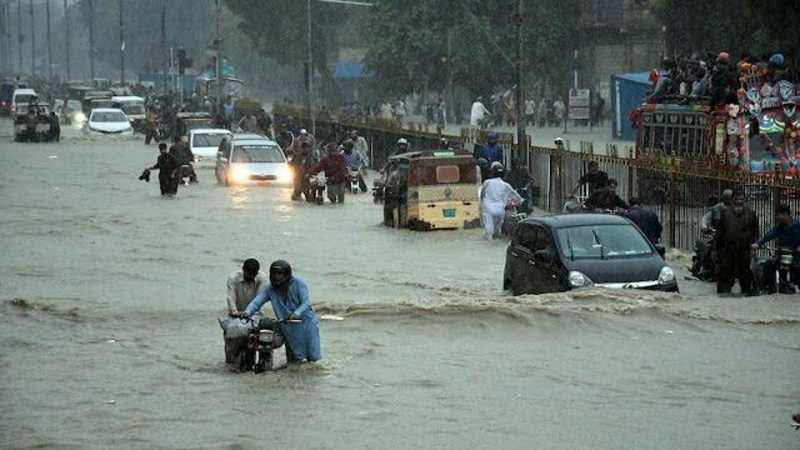 The weather in most parts of all four provinces in the country turned pleasant on Monday as they experience rains amid the first spell of monsoon while three people in Quetta died and several others were injured in the rain-related incidents.

The downpour continued in several parts of Sindh, Punjab, Balochistan, and Khyber Pakhtunkhwa (KP) at regular intervals, and many low-lying areas were inundated. The monsoon rains also came with complaints of power disruption due to the tripping of electric feeders which added to the difficulties for the people.

Many people flocked to the tourist spots to make most of the weather they had waited for amid a long spell of hot and humid weather.

The showers in Gorakh Hill Station – known as Sindh’s Murree – and Tharparkar augmented the beauty of the sites. The roads were submerged in areas of Dadu, Jacobabad, Kandhkot, Shahdadkot, and others after experiencing rainfall while the power supply was also disrupted. The low-lying areas of Shikarpur and Khairpur were inundated due to inadequate drainage measures and heavy rainfall. Different areas of Punjab including Attock and Narowal also witnessed downpours which turned the hot weather beautiful. Sher Shah Suri Road in Swabi in KP was flooded after heavy rains.

Thundershowers were also experienced in the Kohlu district of Balochistan and many low-lying areas were inundated. Three deaths including women and several casualties including children were reported from Quetta as the walls collapsed in Sariab Mill and Goharabad, the local police said.

Different areas of Karachi experienced the first monsoon rain as light showers broke the long hot and humid weather spell. So far, the highest rainfall has been recorded in Gulshan-e-Maymar, 23mm, followed by Surjani Town with, 27mm, and Gulshan-e-Hadeed, 16mm. Some 12.8mm rain has been recorded in North Karachi and 11.5mm in Quaidabad.