Kim Kardashian and Pete Davidson vacation together in Tahiti 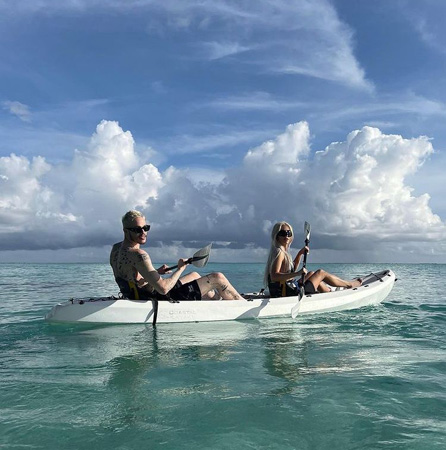 Live from the beach, it’s Kim Kardashian and Pete Davidson. The SKIMS mogul and the Saturday Night Live alum recently enjoyed a tropical trip to Tahiti, a source tells E! News, adding, “They flew to Papeete on her private jet and then went to Brando Island.”

Kim gave fans a glimpse into the scenic vacation on Instagram June 13. “Beach for 2,” she wrote alongside a series of snaps, including one of the bathing suit-clad couple packing on the PDA and another of the blonde duo kayaking together.

And in a video posted to Kim’s Instagram Story, showing her posing on the beach, she noted that Pete, “passed the content taking boyfriend test,” which is just the latest milestone in the couple’s relationship.

In fact, Pete has been spending more time with Kim’s family, including her four kids-North, 8, Saint, 6, Chicago, 4, and Psalm, 3-who she shares with ex Kanye West.

“Pete and Kim’s relationship has become more serious and Kim feels very comfortable allowing Pete to be around the kids,” an insider previously told E! News. “Kim didn’t want to force anything and loves that it has been a natural progression. She loves that she can trust Pete to take them to do activities on his own.”

“She thinks it’s really cute and is grateful how seamless it’s been,” the insider added. “Pete is really good around the kids, and they all love him.”