* The superheroes are braving Karachi's sweltering heat in a van, debating whether they should have spent more on buying Bluetooth or an air-conditioner for the vehicle 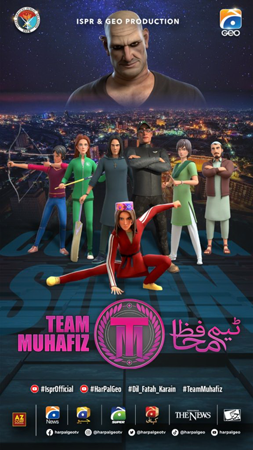 The very first episode of ‘Team Muhafiz’ – Pakistan’s very own crime-fighting teenage superheroes – has arrived with a bang and left thousands with an unsatiated thirst for more.

Titled ‘Parchi’ (you’ll soon know why), the action-packed 11-minute episode begins with a scene familiar to many in Pakistan – a bulletin detailing the worsening law and order situation of Karachi. The scene then cuts to Zane (voiced by the hilarious Syed Shafaat Ali), Parinaz and Mahnur and Reza.

The superheroes are braving Karachi’s sweltering heat in a van, debating whether they should have spent more on buying Bluetooth or an air-conditioner for the vehicle. Real relate to the muggy weather as a Karachiite.

The exchange is cut short after Parinaz receives critical information about a “Zoltar” from another member, Badshah Khan, on her smartwatch (this show is already giving me peak 2005 Disney vibes; we are looking at you, Kim Possible).

Trouble brews a few blocks from where our heroes wait and less than two minutes into the episode as Addu and his gang arrive. Scared stiff, nearby pedestrians dart away from the villains as soon as Addu’s jeep screeches to a halt and his goons step out, demanding a hefty Rs 100,000 as extortion money from shop owners. The choice is simple; either you pay or it’s your brains on the pavement.

But for one shop owner, the choice isn’t that simple. Undaunted, he refuses to pay up and tries to convince the others to not part with their hard-earned money. The move doesn’t end well for the shop owner as the armed goons tie him to a lamp post after assaulting him.

Not to worry, our heroes arrive – albeit with some differences – but with one goal in mind: their duty to the country.

Parinaz expertly dodges knife thrusts from one of Addu’s goons and disarms him swiftly, and that too, with a hockey touch. Skilled in wielding the stick, she delivers blows one after the other to the villain until he’s had his fill.

If you thought a hockey stick in Parinaz’s hands did some damage, Zane wreaked havoc with a cricket bat as he beats a second member of the gang black and blue before he, too, relents. From their exchanges, we know Zane is the hot-headed one in the group. Better watch our, villains. You may have your hands full with this one.

The villains may be outdone but not outsmarted. It isn’t long before Zane and Parinaz realise that Mahnur isn’t with them (Reza still seems to be on top of the building where he was earlier seen playing the flute). As Addu points a gun at Mahnur, she jumps up into the air, only to land a bone-crushing kick to his chest with every ounce of power she can muster and then tackles the rest of them.

We then get a glimpse of who our heroes are. Parinaz, code name “Rahbar” is the only daughter of a former hockey Olympian. She’s the team leader who’s on a mission to fulfil her father’s unfinished dreams. Next is Zane, code name “Shahsawar”, the most aggressive member of the team who apart from resembling Shoaib Akhtar, was once a member of the Balochistan regional cricket team. However, his life turned upside down when the 2017 church attack inflicted irreversible wounds on Zane – his parents died in the attack and ever since then, he decided to use his bat outside the cricket ground and, for a nobler cause.

Reza, code name “Nishandar” is the Karate Kid of the group, quite literally. He has some serious skill with the bow and arrow in his armoury, as he was trained by the legendary arrow master and martial artist Yu Hai Tao.

The group’s youngest member is Mahnur, code name “Cheeti” who hails from Gilgit and is the area’s first female martial arts champion. And mentoring this team of everyday heroes is Havaldar Farman (voiced by Ahsan Khan), code name “Nazim” who is a former SSG Commando, now on a mission to tackle the issues plaguing our society.

But things take a turn for the wild as the goons try to run away but are cornered by Parinaz and Reza. Reza finally shows up to the fight to save Parinaz from a bullet but it’s too little, too late. Addu throws a smoke bomb and disappears.

As usual, the crime patrol team aka the police, arrive just in time to arrest our heroes. It wouldn’t be Pakistan until the po-pos arrive late to claim the credit. But no credit is claimed, and our heroes are almost hauled away before one of the shop owners tells the real story, saving the four from a trip to the police station.

The episode closes with the appearance of a mysterious and menacing Rawka who, after being left red-faced by the incompetency of his crew, is thirsting for revenge.

The Rawka is the antagonist we all love to hate. Fingers crossed for what the next episode holds for our favourite teenagers doing their best to keep Karachi’s streets free of criminals.

Several themes blend together to embellish the first episode of ‘Team Muhafiz’. The episode offered riveting action scenes, interesting characters and a story arc that promises to deliver more in the next couple of weeks.

The presence of strong, female characters in the show is a breath of fresh air in conservative Pakistan and will go a long way in dispelling the impression that only men can stand up to societal menaces.