* 'Guys, I'm getting a lot of concern that I was seen in an ambulance in Barcelona recently,' Shakira tweeted on June 4 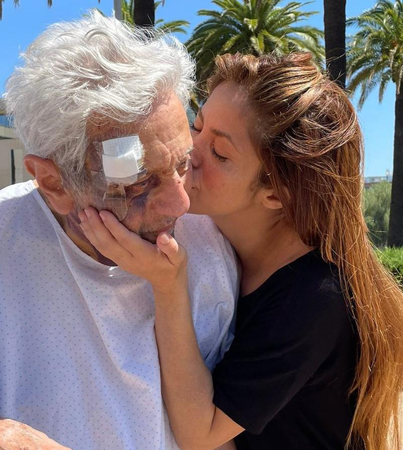 Shakira is speaking out after sparking health concerns a day before she and Gerard Piqué announced their breakup.

On June 3, ¡Hola! magazine published photos of what it said was the “Hips Don’t Lie” singer looking tearful while sitting on the passenger seat of an ambulance near her home in Barcelona. The outlet said the photos, which also showed Gerard and her mom Nidia del Carmen Ripoll Torrado standing outside, were taken on May 28.

“Guys, I’m getting a lot of concern that I was seen in an ambulance in Barcelona recently,” Shakira tweeted on June 4. “I just wanted to let you know that those photos are from last weekend (the 28th), when my dad unfortunately had a bad fall and I accompanied him in an ambulance to the hospital where he is recovering now.”

Shakira included in her post a photo of herself kissing her father, William Mebarak Chadid, 90, who is sporting a bandage over his eye.

“Please do send all your best wishes his way,” the singer wrote, “and thank you all as always for all of your love & support.”

Hours earlier, Shakira and Gerard announced that they had split. The two, parents of sons Milan, 9, and Sasha, 7, had been together for more than 11 years.

“We regret to confirm that we are parting ways,” they said in a statement to E! News. “For the well-being of our children, who are our highest priority, we ask that you respect their privacy. Thank you for your understanding.”