Pakistan’s desire for peace not a sign of weakness: Shehbaz 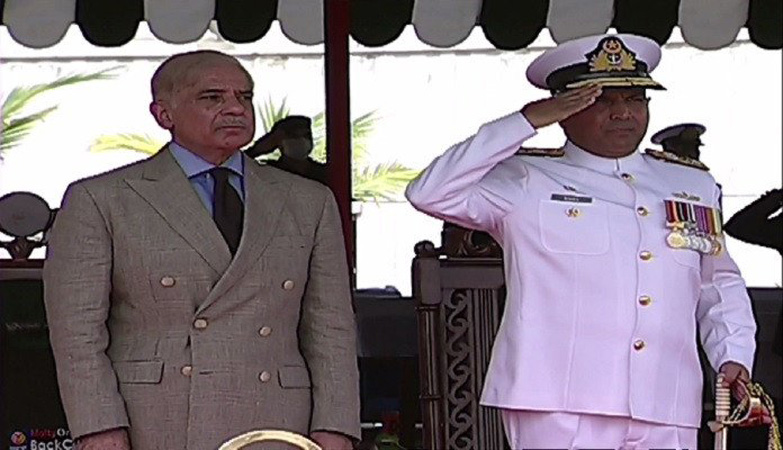 Prime Minister Shehbaz Sharif on Saturday said that Pakistan believed in peaceful co-existence and wanted to promote friendly relations as it did not harbour any designs against anyone.

Addressing a passing out parade of 117th Midshipman and 25th Short Service Commission course at Pakistan Naval Academy, the prime minister said Pakistan’s desire for peace must not be taken as weakness.

He said the entire nation was proud of its armed forces for their continuous vigil to foil enemies’ designs and rendering huge sacrifices in the fight against terrorism. He observed that Pakistan navy had been effectively playing its part to the overall deterrence and national security with the available resources.

Lauding the contribution of Pakistan Navy, the prime minister said that it had a legacy of valour and professionalism and expressed the confidence that the newly commissioned cadets would further strengthen that legacy. He underscored that the maritime domain was continuously shifting, mainly due to technological advancement and power re-shuffle globally. Only those navies would prevail and prove effective that would align with ever evolving geo-strategic spectrum and modern trends of warfare, he added.

He said that the three Services had proved their mettle against all threats at the borders. The whole nation paid tributes to all shuhada and their families, who had secured the country against all threats with their ultimate sacrifices, he said, adding the nation saluted them all. Chief of the Naval Staff, Admiral Muhammad Amjad Khan Niazi And Chief Minister Sindh Syed Murad Ali Shah also attended the passing out parade. The prime minister said Pakistan was blessed with large coastline which held vast potentials which could be utilized by further strengthening of the defence capabilities and boosting of the maritime economy.

“Pakistan’s economic future hinges upon success of CPEC,” he said, adding the Gwadar port was its major project. He underscored that Pakistan Navy had even more important role to play in the present age of ever growing blue economy, marine security and strategic defence. The prime minister said Pakistan Navy with its available resources continued to fulfill and perform well to meet the international obligations, besides countering multiple challenges. He said equipping Pakistan Navy with the latest technology for safeguarding maritime borders of the country was a priority of the government.

Congratulating the newly commissioned cadets and midshipmen, he said that it was an auspicious occasion in the lives of these young men to start their wonderful naval career with a sense of great achievement and pride.

Extending felicitations, the prime minister advised the young officers to lead by their conduct, character, knowledge and foresight. The prime minister said that it was matter of great satisfaction for him that females cadets also formed the part of today’s parade, that signified their innate strength and confidence. They would serve as role model for the Pakistani girls and inspire them to pursue their dreams and acquire success in their chosen fields, he added. The prime minister said Pakistan was also extending quality cadet training to the brotherly countries including Bahrain, Palestine and Qatar. The prime minister also congratulated officers from friendly countries on being commissioned in Forces of their respective countries.