* Moreover, Nimra Bucha also made an appearance in the superhero series as she helms the character of Najma 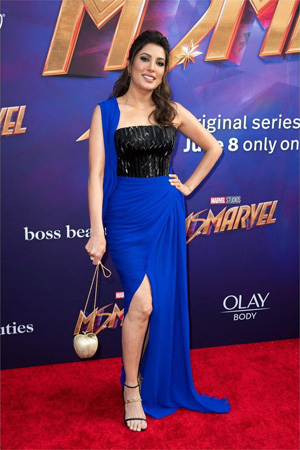 Pakistani actor Mehwish Hayat is going all out as she just launched her Hollywood career with an impactful appearance in the latest episode of Ms Marvel.

Hayat’s first look as the protagonist Kamala’s great-grandmother Aisha was recently released as the character connects the present with the past.

Moreover, Nimra Bucha also made an appearance in the superhero series as she helms the character of Najma.

Earlier this month, Hayat opened up about having realised her dream of being a part of the Marvel project.

“Working on Ms Marvel and being part of the MCU is a dream come true for me!” she wrote on Instagram.

“You cannot believe what it means to finally have the first brown Muslim superhero that we can all relate to and who speaks for us. “Words can’t describe how happy my inner child is to see my culture being so accurately represented on screen, in a mainstream Hollywood production,” she added.

She continued: “I hope that this will not only show actors in Pakistan that they need to look beyond their own borders but also give Hollywood the confidence to cast talent from Pakistan.”