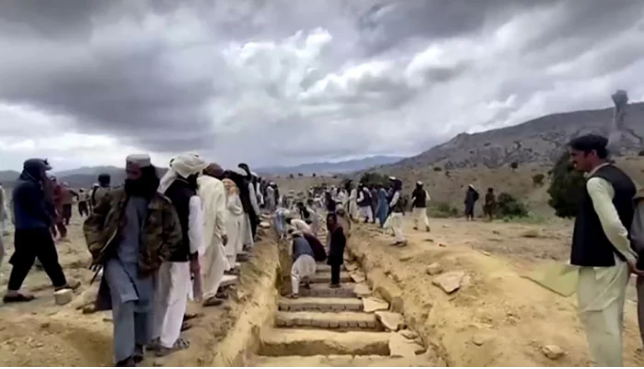 Scores of people dug graves to bury the earthquake dead in the Paktika province of Afghanistan amid massive aid from across the world, as the death toll from the tremors that jolted Afghanistan on Wednesday hit 1,000, with the number expected to rise.

A 6.1-magnitude earthquake struck early Wednesday morning about 160 km, (100 miles) southeast of Kabul, in arid mountains dotted with small settlements near the border with Pakistan.

The Afghan authorities struggled on Thursday to reach a remote area hit by an earthquake that killed 1,000 people but poor communications and a lack of proper roads hampered their efforts, officials said.

“We can’t reach the area, the networks are too week, we trying to get updates,” Mohammad Ismail Muawiyah, a spokesman for the top Taliban military commander in hardest-hit Paktika province, told Reuters, referring to telephone networks.

The earthquake has also left 1,500 injured and more than 3,000 houses in ruins, he said, adding that 600 people had been rescued from various affected areas on the disaster’s night.

The town of Gayan, close to the epicentre, sustained significant damage with most of its mud-walled buildings damaged or completely collapsed, a Reuters team said.

The town was bustling with Taliban soldiers and ambulances as a helicopter bringing in relief supplies landed nearby, whipping up huge swirls of dust. About 300 people sat on the ground waiting for supplies.

The rescue operation will be a major test for the hard-line Islamist Taliban authorities, who took over the country last August after two decades of war and have been cut off from much international assistance because of sanctions.

The Taliban-led ministry of defence is leading rescue efforts.

Afghan media published pictures of houses reduced to rubble and bodies swathed in blankets on the ground in the hours after the earthquake struck.

Accurate information has been limited from remote mountain villages.

The National Disaster Management Authority (NDMA) of Pakistan has dispatched relief goods for earthquake victims in Afghanistan on the special directives of Prime Minister Shehbaz Sharif.

Pakistan has assured Afghanistan of its full support in this difficult time.

South Korea plans to provide $1 million in humanitarian assistance to victims of an earthquake in Afghanistan, Seoul’s foreign ministry said on Thursday.

Meanwhile, the Japanese government plans to provide assistance to Afghanistan, a government spokesperson said on Thursday.

Health and aid workers said an unknown number of people remained stuck under rubble and in outlying areas, and rescue operations were complicated by difficult conditions, including heavy rains, landslides, and many villages being nestled in inaccessible hillside areas.

“Many people are still buried under the soil.” The rescue teams of the Islamic Emirate have arrived and, with the help of local people, are trying to take out the dead and injured, “a health worker at a hospital in the hard-hit Paktika province said, asking for anonymity as he was not authorised to speak to media.

Mounting a rescue operation will prove a major test for the Taliban authorities, who took over the country last August after two decades of war and have been cut off from much international assistance because of sanctions. The Taliban-led ministry of defence is leading rescue efforts.

Loretta Hieber Girardet, from the United Nations’ disaster risk reduction office, said efforts to provide relief and save people trapped under rubble would face huge challenges due to the terrain and weather.

“The roads are poor even at the best of times, so having a humanitarian operation put in place is going to be immediately challenged by the lack of easy access to the area,” she said, adding that rain combined with the tremor created a further risk of landslides for humanitarian workers.

The UN office for humanitarian aid said it would send medical teams and give medical supplies.

Interior ministry official Salahuddin Ayubi said the death toll was likely to rise “as some of the villages are in remote areas in the mountains and it will take some time to collect details.”

Wednesday’s quake was the deadliest in Afghanistan since 2002. It struck about 44 km (27 miles) from the southeastern city of Khost, near the border with Pakistan, the US Geological Survey (USGS) said.

Shaking was felt by about 119 million people in Pakistan, Afghanistan, and India, the European-Mediterranean Seismological Centre (EMSC) said on Twitter, but there were no immediate reports of damage or casualties in Pakistan.

The EMSC put the earthquake’s magnitude at 6.1, though the USGC said it was 5.9.

Disaster experts and aid workers said that the hilly areas that were poor and hit by the earthquake were especially at risk because of landslides and poorly built homes.

“We were all sleeping at home… and the room fell over us,” said Gul Faraz as he received treatment for injuries with his wife and children at a hospital in Paktika. Some family members had been killed, he said.

“All the houses in our area were destroyed, not one, but the entire region has been destroyed.”

Most of the confirmed deaths were in the eastern province of Paktika, where 255 people were killed and more than 200 injured, Ayubi said. In the province of Khost, 25 were dead and 90 had been taken to hospital.

Recent flooding in many regions has added to the difficulty for Afghan authorities, causing stretches of highway to be closed.

Afghanistan is also grappling with a severe economic crisis. Last year, when the Taliban took over, many countries put restrictions on Afghanistan’s banks and cut billions of dollars in development aid.

Humanitarian aid has continued, however, from international agencies such as the United Nations.

US President Joe Biden directed the US Agency for International Development and other federal government partners to assess US response options, the White House said.

“We count on the international community to help support the hundreds of families hit by this latest disaster. Now is the time for solidarity,” he said in a statement.

The Japanese government plans to provide assistance to Afghanistan, a government spokesperson said on Thursday, after an earthquake there killed at least 1,000 people.

US unaware of request for aid from Taliban-led Afghan govt

The US State Department said it was not aware of any request for American assistance from Afghanistan’s Taliban government after an earthquake there on Wednesday that killed at least 1,000 people.

The United States expects the humanitarian response to the disaster to be a topic of conversation between Taliban and US officials in the coming days, State Department spokesperson Ned Price told reporters.