If those chairs could talk

* 'It was very opulent, yet very cosy,' Kugel said 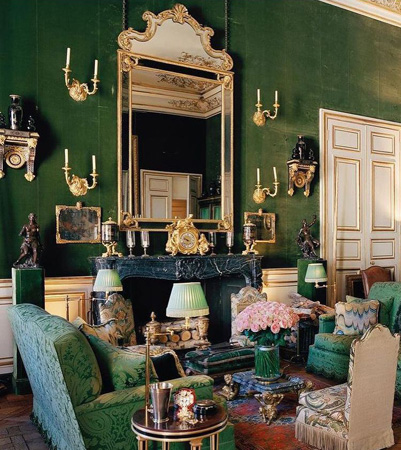 When guests arrived at the Hotel d’Orrouer, French couturier Hubert de Givenchy’s stately 18th-Century mansion, they rang a polished brass doorbell on the limestone wall. Once the bell was rung – no sound was made – the guardian would open the right side of the monumental evergreen-lacquered double doors and usher in the guests. The white pea gravel courtyard was raked to such meticulous perfection it was unthinkable to cross it. “You’d walk on the pavement along the wall and not on the gravel,” said Nicolas Kugel, an owner of the Galerie Kugel, one of de Givenchy’s preferred antique dealers in Paris. “If a car came in to make a delivery, the gravel would be raked right after.” If the visit was in the warmer months, Paul, the butler in livery, would lead the way to the ground floor salon of the summer apartment: a large room that was both imposing, with its 18th-century gilded commodes and important art and inviting, with its cushy white linen sofas, bouquets of white flowers and a golden Labrador retriever or two, tails wagging but somehow never knocking one of the many precious objects off a low table. If it was the colder months and you were a good friend or family, you would be taken up to the winter apartment’s Salon Vert, a “very grand” room, Kugel remembered.

The Salon Vert was dark and rich, with green silk velvet upholstery and curtains, gilded Louis XIV armoires and commodes, and a fire lit.

“It was very opulent, yet very cosy,” Kugel said. In whichever salon you were seated, once you had a moment to take in all that beauty, in would sweep Monsieur de Givenchy, who, like his home, was quite grand and gracious. He would be followed by his life partner, fellow French couturier Philippe Venet.

This month, 1,229 lots of items de Givenchy collected for the Hotel d’Orrouer, as well as for the Manoir du Jonchet, his Renaissance chateau in Touraine, will be auctioned by Christie’s in Paris. With an estimated value of 50 million euros, the auction, which was held live June 14-17 at the The?a?tre Marigny and Christie’s on the Avenue Matignon, and online through Wednesday, will be the largest-ever sale for Christie’s Paris.

The sale also signals, in a sense, the end of a certain continental way of life, a sort of effortless grandeur that de Givenchy, who died in 2018 at 91 and Venet, who died last year, also at 91, spent a lifetime cultivating.

“It’s really the final goodbye – to them, to that era and to that generation in French couture,” said Zoë de Givenchy, the wife of de Givenchy’s nephew Olivier. “They were the last.”

Count Hubert James Marcel Taffin de Givenchy was born in Beauvais, a city north of Paris, where his grandfather was the director of the revered Beauvais and Gobelins tapestry workshops. De Givenchy chose fashion design as a career, and while working for Elsa Schiaparelli after World War II, he fell in love with Venet, a fellow assistant. They moved in together and each subsequently opened a couture house. De Givenchy made his international reputation by dressing Audrey Hepburn for her movie roles, most notably “Breakfast at Tiffany’s” in 1961.

American philanthropist Catherine Blair, known as Deeda, met de Givenchy in the early 1960s. She wore a gown by Balenciaga and a veil by Givenchy when she married William McCormick Blair, the United States ambassador to Denmark, in 1961 and became a devoted Givenchy client. Back then, de Givenchy and Venet lived on the Rue Fabert, “with a Rothko on the wall and dark, dark screens to the ceiling, and books all over the coffee table,” Blair recalled.

Sometime in the mid-1980s, de Givenchy told Blair he had fallen in love with a house. “He said, ‘It’s the house of my dreams, and it is very big,’ and I said, ‘Oh, Hubert, I’d love to see it.’ And you couldn’t believe such a thing had survived the revolution. But there it was. He knew exactly what he was going to do with it. He had perfect pitch on where furniture should go, where it should fall in the world. That house was his great, great love.”

“All of his sofas were done by Maison Decour, the Rolls-Royce of comfortable sofas,” said Susan Gutfreund, who, with her husband, John Gutfreund, the CEO of Salomon Brothers investment bank, owned the apartment on the west side of the Paris property. Gutfreund preferred “the wonderful tiger-print velvet chairs.”

“There was a small one and a large one, and I used to sit on the large one quite a bit,” she said. Both are in the Christie’s sale. “And the lighting,” she added. “Hubert made a big effort with his lighting – soft and encompassing. It was really perfection.”

But there would always be room for improvement. “He could part with things and replace things to upscale his collection,” said Kugel who, with his brother Alexis, has staged a parallel exhibition in their gallery of pieces de Givenchy sold off over the years.

“There was never a jarring sense that things had changed,” Gutfreund said. “You would have to spend some time there to see that those two chairs were new.”

In 1992, de Givenchy’s Labrador, Sandy, “had a hip problem, and was on wheels,” Kugel said. Because it was difficult to take the dog from the first-floor flat down to the garden, de Givenchy decided to sell the upper apartment and everything in it.

“He called Christie’s, and they did a fantastic auction in 1993, and it was a huge success – over the moon,” Kugel said. “Millions and millions. Then some of his New York friends said there was a new hospital in New York that specialized in dogs and told him to bring Sandy. He and the dog took the Concorde, the dog had a hip operation and could walk again, and he decided to keep the apartment and refurnish it.” Which meant more collecting. Two years later, at the age of 68, de Givenchy retired from his couture house, which was then owned by LVMH. He worked on several Christie’s exhibitions and auctions, including the sale of some of his Diego Giacometti pieces in 2017. Many more are among the lots this week.