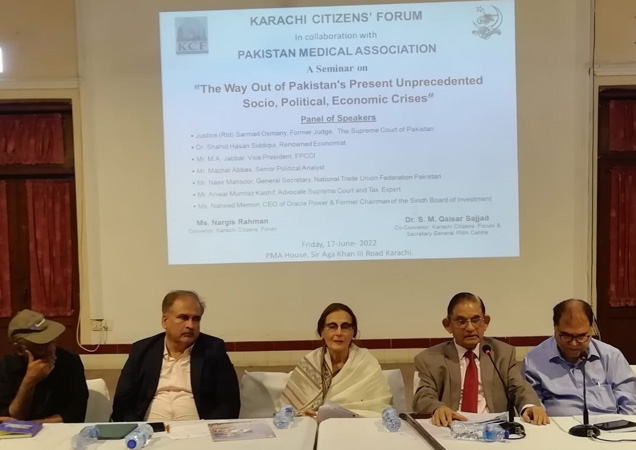 The focus of discussion was actions that government should take as a way out of Pakistan’s present unprecedented socio, political, economic crises. Broadening tax base is perhaps the most significant economic necessity. After 70 years of existence, the country has less than two million income tax filers, one of the lowest tax-to-GDP ratios in the world, and a tax system which riddled with inequity and corruption. Ending corruption; the more corrupt the country the less possibility of broaden the tax base, to include feudal lords, agriculture, and bureaucracy.

Subsidies and government support to contain desperate acts of a hapless and helpless population. The share of investment to GDP remains minimal at 15%, about half of the South Asian average at 30% and one of the lowest in the world.

This must improve enough infrastructure must be built, both for industrial growth and human capital development road and transport infrastructure, a sufficient levels of energy and water, quality schools, and hospitals are a must.