PPP to form next govt in Centre 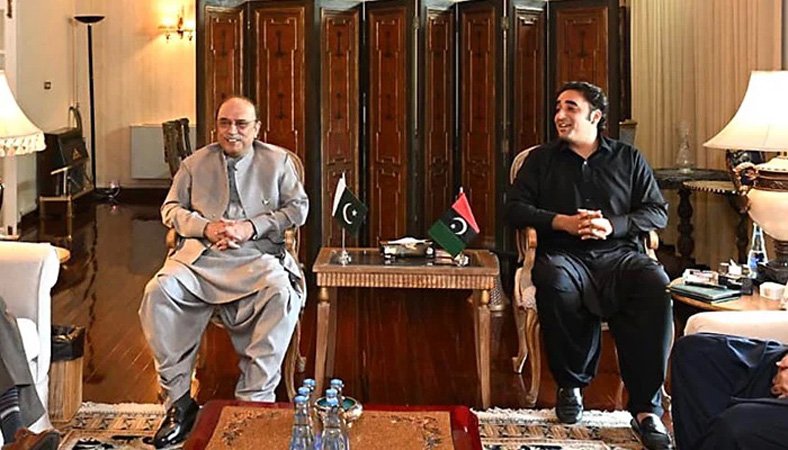 PPP Co-chairman Asif Ali Zardari said Saturday that his party would form the next government and vowed to turn the country by “110 degrees”. In a meeting with party leaders at Bilawal House, the former president said, “We will take the entire share [in the government] next time. If I get the chance to serve, I will turn the country by 110 degrees.” The ex-president said he will engage party leaders in Punjab and work with them for the next polls. He added that claims of PPP’s politics coming to an end in Gilgit-Baltistan and Punjab are “white lies”. PPP “weakened” its political presence in a bid to “save” the country, Zardari said. “They don’t listen to us and only do when they need us,” he said, without naming anyone. The PPP is currently ruling the Sindh province, where it has been forming the government since the last three general elections, while it is also a major stakeholder in the incumbent federal government. Lashing out at former prime minister Imran Khan, the ex-president said the surge in inflation is due to the “favourite” person’s policies that he adopted in his 3.5-year tenure. Inflation across the country is surging after the government hiked the rates of petroleum products, electricity, and gas in a bid to revive the stalled International Monetary Fund (IMF) programme. He said that fate of the country would be changed if the PPP got opportunity to rule. He said that he was shifting to Gulberg as the workers faced difficulty to reach Bahria Town. He congratulated and welcomed Ashraf Bara on joining the PPP. On the occasion, PPP Punjab Women Wing President Samina Khalid Ghurki said presence of senior leadership especially Asif Zardari in Lahore was a good decision which would strengthen the party. Party leaders of the city were present in the gathering.