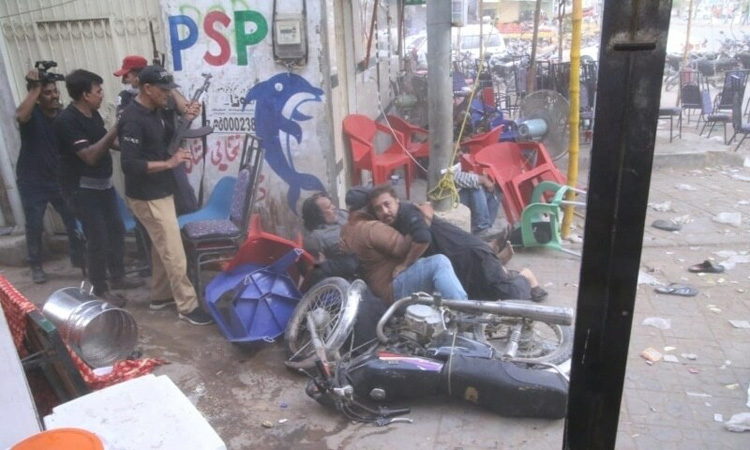 Violence marred the NA-240 by-election on Thursday as a man was gunned down while around one dozen others sustained injuries.

Jinnah Postgraduate Medical Center (JPMC) officials confirmed that the deceased Saifullah, 60, died when he was brought to the hospital.

The administration officials said five injured people were brought to the hospital, adding that some had gunshot wounds, while others sustained injuries after being beaten up with sticks. The incident took place as political activities heightened in the constituency – which covers areas in Korangi and Landhi – with political parties eyeing to win the NA seat. Voting continued uninterrupted till 5pm on the seat that fell vacant after the death of MQM-P MNA Muhammad Ali Khan this year on April 19.

As many as 25 candidates, including MQM-P’s Abu Bakr, Mohajir Qaumi Movement’s Rafi Uddin Faisal, Pak Sarzameen Party’s (PSP) Shabbir Qaimkhani, PPP’s Nasir-Lodhi, and TLP’s Kashif Qadri were contesting elections for the seat. PTI and JI boycotted the by-elections, says a news report. PSP chief Mustafa Kamal confirmed that the deceased person was a member of his party and several others were in critical condition. 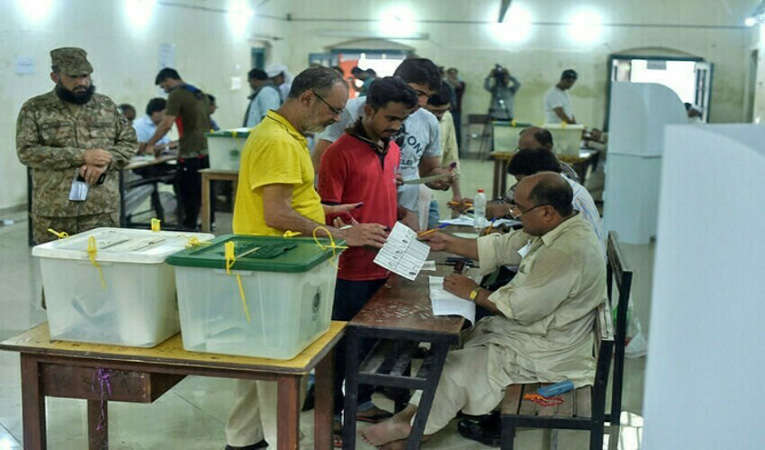 “He was our party member. He was an elderly person and resided in Baldia. The TLP people attacked us and killed my party member,” the PSP chairman said, rebutting the claims of the TLP that they were attacked.

Kamal said had the PSP used weapons, no one would be able to open fire at their offices and return safely. “They (TLP) are spewing lies. I appeal to the authorities that arrest them or give us weapons.”

Ruling out that his party resorted to violence, Kamal said his party members’ “lives were very precious to him” and that he wanted action to be taken against TLP for allegedly gunning down his party member.

Kamal was present at the time when the firing incident took place during the by-polls – which witnessed low-voter turnout amid the violent clashes. 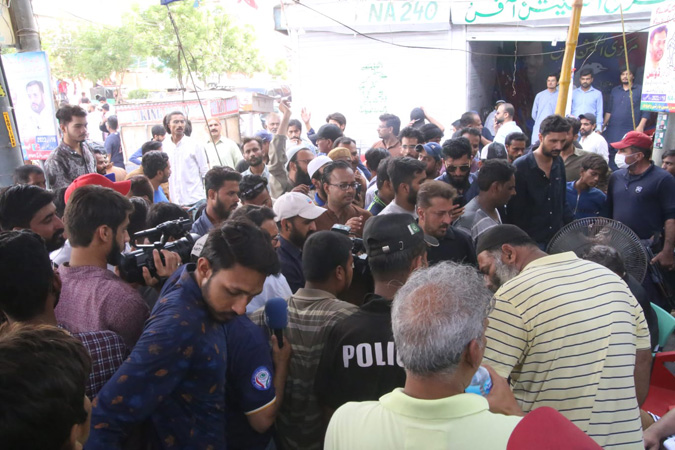 Talking to a news channel, Mufti Ghous Baghdadi said several of his party workers were injured in clashes as he claimed that “losers” resorted to violence.

“The people who see that their loss is near resort to violence. All this violence took place under the supervision of Anees Kaimkhani and Mustafa Kamal,” he said. The TLP leader said the PSP leaders wanted to give an impression that there were no bigger “thugs” than them.

In the evening, the vehicle of PSP leader Anis Kaimkhani was fired upon in the Korangi area, but fortunately, the PSP leader was not in the car when the incident took place. The police mobile that was moving along with Kaimkhani’s vehicle was also fired upon. In response to the violence that marred the by-polls, Sindh Information Minister Sharjeel Memon said Chief Minister Sindh Murad Ali Shah had taken notice of the incidents.

The information minister said CM Shah has spoken to Inspector-General Sindh Ghulam Nabi Memon and directed him to take action against those involved in the violence.

“A police party has been dispatched to arrest those responsible,” Memon said, adding that people had resorted to aerial firing and used sticks to beat members of rival parties.The information minister, noting that seven to six people have also been injured so far, said that the government would try to ensure the polling process concludes safely.

In a conversation with IG Sindh, the chief minister said that no one would be allowed to take the law into their hands and directed the high-ranking cop to ensure that a peaceful environment prevails in the city.

MQM-P’s Rabita Committee condemned the incident, saying that it was committed by the “thugs” of PSP and TLP and added that it was “well-organised planning” that affected the polling procedure.

The MQM-P, which was once a formidable political force in Karachi, said that its polling agents were beaten and thrown out of polling stations. The party said that “armed mobs” made polling staff hostage.

“The law enforcement agencies were playing the role of spectators as [members from political parties] locked polling stations,” the MQM-P said, demanding the ECP to take notice of the situation.

Meanwhile, Additional Inspector-General of Police (AIG) Karachi Javed Alam Odho said that he had spoken to the district returning officer (DRO) and will register a case against people involved in violence during the by-polls.