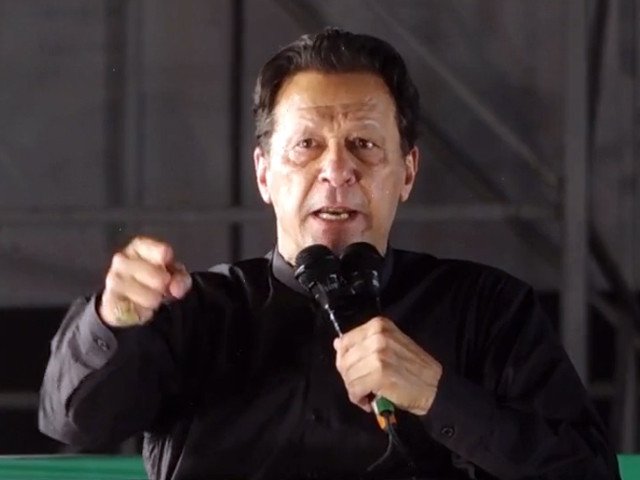 PTI Chairman and former premier Imran Khan Thursday urged the masses to demonstrate countrywide against the ‘imported’ government on June 19. “This Sunday, all of you have to protest at 9pm and I will address all of you via video link at 10pm,” he told his supporters and common people in a video message, asking them to hold peaceful demonstrations. He also invited the political parties and women to join the PTI’s protest against the rising inflation.

“It is our democratic and constitutional right to protest; we have always held peaceful protests.”

In a scathing attack on the government, Khan said: “I want to give a message to these people: If you could not handle the affairs of the country, then why did you conspire?”

Imran said the government was claiming that his party had installed “landmines” for the incoming setup, as it was unable to manage the country’s affairs. “Why did you derail a country that was moving in the right direction. [You] did it just to save your corruption,” the PTI chairman lashed out at the coalition government, says a news report.

Imran said the government, giving reasons for the rising inflation is stating that there is an international crisis, therefore, it has impacted Pakistan as well. “You have understood this now? We were facing these issues as well. I repeatedly stated that we were saving our people from inflation despite a global increase in prices,” Khan said.

Earlier, addressing lawyers at a ceremony organized by the Islamabad High Court Bar Association, Imran claimed that the coalition government had ‘no plan’ to steer the country out of the economic challenges and feared that if the incumbent coalition remained in power, the country might face a situation compelling it to compromise on its sovereignty.

Imran feared that the rulers might weaken the country economically and lead it to a point where “those who come to bail us out may put forward a condition that will compromise our sovereignty, compromise our independence”.

“The direction in which Pakistan has headed, I fear that we might face Sri Lanka like situation. There has been an economic collapse there and I fear that we are headed in the same direction.”

In this context, Imran also gave the example of the Soviet Union, which he said was “militarily strong but economically weak”, which is it why broke apart.

And, he continued, only “free and fair elections” could save the country from “sinking in a mire”. He also berated the government for the recent hike in petroleum prices, saying that inflation would soar as a result of the decisions and people would be “crushed”.

Imran said the government did not have a roadmap to salvage the economy and the market had lost confidence in it.

“But instead of concentrating on the economy, their only interest is in getting a second NRO,” he said. Earlier, the PTI chief began his speech recalling events that led to his ouster as the prime minister in April.

“I was told that after the no-confidence motion [against me] was passed, [and] I should have constitutionally accepted it. But I ask you today, I put the facts before you,” he said, claiming that on March 7 – a day before the then-opposition filed the no-confidence in the National Assembly – the US Undersecretary of State for South Asia Donald Lu met Pakistan’s envoy in Washington. The US official, he said, asked the envoy Asad Majeed Khan why Imran, who was prime minister at the time, had visited Russia.

Incumbent Foreign Minister Bilawal Bhutto-Zardari also recently defended the visit during his recent visit to the US, saying that Imran couldn’t have known that Russia would launch an offensive in Ukraine during his trip to Moscow.

But, Imran claimed that the US official told Pakistan’s envoy that going to Russia “was my own initiative and the US was displeased by the move”.

According to Imran, the official also brought up the no-trust motion against him, “even before it was filed”.

Then on March 8, he said, the then-opposition filed the motion against him and “suddenly, our allies also realized that the government is very bad”. The PTI chief also claimed that the US embassy had been holding meetings with the PTI dissident lawmakers and opposition leaders at the time.

“Why was the US embassy holding those meetings? Its job is to discuss foreign policy,” he said. “Then our allies part ways, dissident lawmakers are bought to the Sindh House and our government is toppled.” He said the first two years of the PTI’s government were the most difficult when it faced the possibility of default and Covid-19 pandemic.

“If the turncoats had to part ways, they should have left at that time … but why did they leave saying that the government’s performance was not good, when the country was on the right path?” he asked. “This was the conspiracy,” the PTI chief said.

He urged the nation to take a stand against the “conspiracy” and cautioned: “Otherwise, no prime minister will be able to have an independent foreign policy in the future. He will be scared, he will bend when a threat comes from America.”

Imran further gave the example of the US War on Terror, saying that the government conceding to the US demand of participating in the war “despite the US carrying out drone attacks in Pakistan” was “slavery”.

“I am standing against this slavery. Otherwise, it was also very convenient for me to agree not to visit Russia,” he added.

He continued that he had not visited Russia for any personal interest but for the country’s benefit. “We would have procured gas and wheat from Russia,” he said, adding that the Kremlin had also offered oil to Pakistan had 30 per cent cheaper. “But the US says why did I go to Russia?”

Imran also gave the example of India here, which he said was buying oil from Russia at 40pc less rates despite being a strategic partner of the US. If India was allowed to procure oil from Russia, why wasn’t Pakistan, questioned Imran.

The PTI chief also pointed out that Washington’s message regarding his removal was conveyed to the Pakistan envoy, who was his subordinate at the time.

“He made the threat for my removal to the envoy, who worked under me. Then who was he telling to remove me?” he asked, adding that “for whoever the message was for, the action started after that”.

Imran said when the National Security Committee had accepted that there had been ‘interference’ by the US and when President Arif Alvi had sent a letter to the Supreme Court regarding the same, shouldn’t an inquiry be launched into the matter.

“Realise”, he told his audience, “that by accepting an illegal, unconstitutional government of another country, you are setting a trend for the future”.

He also claimed he had explained to the “neutrals, who could have stopped the conspiracy from taking place” that “allowing the conspiracy would exert pressure on the rupee and foreign exchange rate”.

“I asked them not to let any destabilisation take place as the situation could not be handled then. And I also asked Shaukat Tarin to explain to them it was not the time to stay neutral and that if the conspiracy succeeded, it would have a direct impact on the economy,” Imran said. Referring to corruption cases against PML-N leaders, particularly Prime Minister Shehbaz Sharif, he said the cases were being dragged out.

He pointed out transfers of officials since the new government came to power and the deaths of people allegedly related to cases against Shehbaz. “Before you, Pakistan’s rule [of law] is being buried,” he commented. Imran further claimed that after new amendments to the NAB law, all cases against people in the government would be closed.